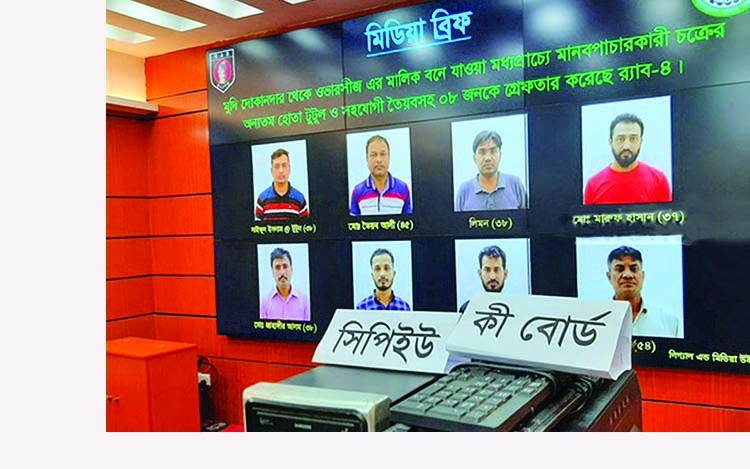 Harboring high hopes of getting a job and decent pay in a Middle-Eastern country, a woman from an impoverished family unknowingly took help from a human trafficking gang in Bangladesh to realize her dreams of a better life.
Little did she know that she would be sold to a household in Jordan from where she might never return to her family, let alone support them.
The trafficking gang came on the Rapid Action Battalion's radar after the woman's uncle, Md Ashraful Islam, informed the authorities that the family had lost contact with her in June and feared she had gone missing. The RAB arrested eight suspected members of the gang that was led by a grocery storekeeper and a teashop owner. They operated three offices in Dhaka and reportedly ran a criminal enterprise by taking money from poor men and women with false promises of lucrative jobs. They even sold some of the victims as slaves in Jordan and other countries in the Middle East.
The elite police unit raided the offices -- owned by one of the suspects -- located at the Gulshan Badda Link Road and made the arrests on Tuesday night, according to RAB 4's Commanding Officer Md Mozammel Haque, bdnews24 reports.
The arrestees have been identified as Md Saiful Islam aka Tutul, 38, Md Taiyeb Ali, 45, Shah Md Jalal Uddin Limon, 38, Md Maruf Hasan, 37, Md Jahangir Alam, 38, Md Laltu Islam, 28, Md Alamin Hossain, 30, and Md Abdullah Al Mamun, 54.
Four victims of the gang were also rescued during the raid, Haque said during a media briefing at the capital's Karwan Bazar on Wednesday.

"Tutul is the ringleader assisted by Taiyeb. He completed his HSC and worked as a grocery storekeeper in Kamdi village in Meherpur's Gangni Upazila. Sometimes, he visited Dhaka.
"He gradually got involved with human trafficking gangs out of greed to swiftly become rich and worked as a middle-man who sent people abroad via different agencies," Haque said.
Tutul, through his agencies called 'Tutul Overseas', 'Limon Overseas' and 'Loyal Overseas' in Badda, swindled educated and unemployed youths out of millions on the pretext of "sending them abroad", Haque said.
"Tutul's assistant Taiyeb never studied. He was a tea-seller who was persuaded by Tutul to get involved in the human trafficking business. There are a lot of accusations against Taiyeb, including sending people abroad through fraudulent means and taking money by falsely promising jobs in Bangladesh," Haque said.
Taiyeb introduced himself as a manager of an airline. He embezzled a huge sum of money by making fake job offers at multinational companies and airports' immigration sections to his unsuspecting victims. Some even got fake appointment letters from him, Haque said.
Among the arrested, Limon and Maruf were administrative workers paid by the trafficking gang. Jahangir, Laltu, Al Amin and Mamun were field workers. Their duties included arranging passports for the victims, providing so-called training, collecting money, and helping victims with different procedures.
HOW THE GANG OPERATED
Numerous members of the trafficking gang brought poor men and women to Tutul and Taiyeb in Dhaka, in the name of providing the victims with jobs for a lucrative salary in Saudi Arabia, Jordan and Lebanon.
Tutul and Taiyeb showed false money receipts and took Tk 200,000 to Tk 500,000 from each of the victims. "To gain trust, the gang introduced themselves as highly educated personnel and provided so-called training on how to work in households," Haque said.
"To clear any suspicion, the gang-members pretended to be office workers, who arranged and managed documents to make passports for the victims. The gang had affiliations with people in the passport office," Haque said, adding that unnecessary medical tests were conducted just to falsely demonstrate that proper preparations were being made to send people abroad.
SOLD INTO SLAVERY
The gang sent women to countries in the Middle East with the promise of providing them jobs at households. But they "sold them" instead, Haque said.
"Men were sent to Jordan and Lebanon, besides Jeddah and Riyadh, only to be exploited in inhumane working conditions. Those who were trafficked could not contact anyone in their families," Haque said.
Ashraful, the man who lost his niece to the 'slave trade', told RAB that Taiyeb and Tutul sent her to Jordan and the family could not contact her after mid-June.
Ashraful added that he got to know that a number of people were "sold in Saudi Arabia" after they were sent to the country through fraudulent schemes.
The gang never returned the money they took from victims who were not sent abroad or given jobs. When people asked for a refund, the gang threatened them in various ways, Haque said.
"All activities of the gang are illegal and based on fraud. They don't provide any tax to the government," said Haque, adding that they don't even have any official name to identify themselves.
Haque said the gang has been operating for four to five years. So far, they have sent 50 people abroad, according to him.
How much money they managed to embezzle is yet to be ascertained. A case will be filed against them on charges of fraud and human trafficking, Haque said.