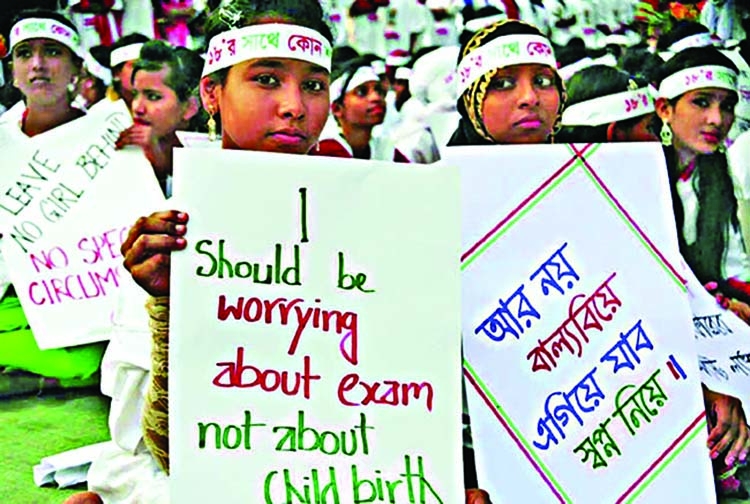 Children holding placards with slogans against the child marriage. The photo was taken from Shaheed Minar premises. -AA file photo
Child marriage is killing more than 60 girls a day globally, a report released by Save the Children, has found. In a year, an estimate of 22,000 girls are losing their lives as a result of pregnancies and childbirth after an early marriage, the report further said.
West and Central Africa accounted for nearly half (9,600) of all estimated child marriage-related deaths worldwide, according to the study. The region also has the highest rate of child marriages in the world and the highest teenage maternal mortality rate, HT reports. In the South Asian region, at least 2,000, an estimate of six a day, child marriage-related deaths are taking place annually, the report found.
South Asia is followed by East Asia and Pacific with 650 deaths and Latin America and the Caribbean with 560 annual deaths. In the report, the organization said the Covid-19 pandemic has stalled the progress made against the practice of child marriage across the world. The virus pushed millions of people into poverty, which has eventually led to higher cases of violence against women. "A further 10 million girls are now expected to marry by 2030, leaving more girls at a risk of dying," the report further read. "Childbirth is the number one killer of teenage girls because their young bodies aren't ready to bear children," said Inger Ashing, CEO of Save the Children International.
He urged governments around the world to focus on girls and bring norms to protect them from child marriage and premature child-births.