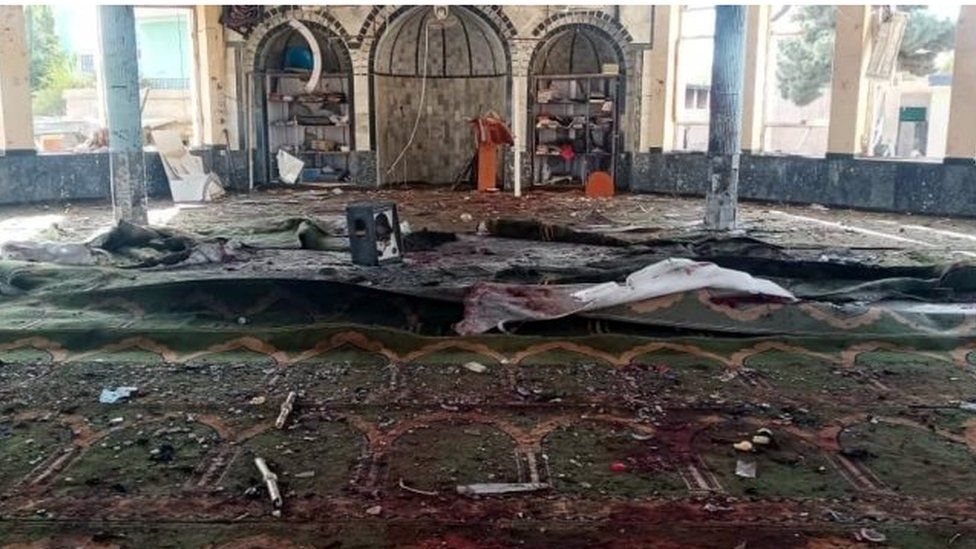 More than 40 people were killed and dozens more injured after blasts tore through a Shia mosque during Friday prayers in the Afghan city of Kandahar.
Pictures from inside the Bibi Fatima mosque show shattered windows and bodies lying on the ground, while other worshippers try to help.
The mosque was packed with worshippers as the suicide attack took place.
The Islamic State group (IS) released a statement saying it was behind the blasts.
It said two attackers shot and killed guards before entering the building and blowing themselves up.
"The firing started after we ended the prayers," a man named Ahmadullah told AFP news agency. "Then two, three explosions took place. We were thrown towards the window. Many people, martyred [killed] or wounded, were laying there."
Friday prayers are the busiest congregation of the week. At least 15 ambulances were at the scene afterwards, an AFP journalist said.
Taliban special forces secured the site and asked people to donate blood to help the victims, Reuters reports.
A regional branch of Islamic State, IS-K, has carried out multiple attacks in the past in Afghanistan and opposes the country's Taliban rulers.
Kandahar is Afghanistan's second largest city and the spiritual birthplace of the Taliban, so an attack in the city by IS-K is seen as significant.
Last Friday, a suicide attack on another Shia mosque during Friday prayers in the northern city of Kunduz killed at least 50 people. IS-K said it carried out the attack, which was the deadliest since US forces left at the end of August.
IS-K, a Sunni Muslim group, is the most extreme and violent of all the jihadist militant groups in Afghanistan.
It has targeted Afghan security forces, Afghan politicians and ministries, the Taliban, religious minorities including Shia Muslims and Sikhs, US and Nato forces, and international agencies, including aid organisations.
Sunni Muslim extremists have repeatedly targeted Shia Muslims in the past, whom they see as heretics.
About 10% of Afghanistan's population are thought to be Shia Muslims. Many are also part of the Hazara community, the country's third largest ethnic group, who have faced discrimination and persecution for years in Afghanistan and neighbouring Pakistan.
Earlier this month, rights group Amnesty International accused the Taliban of murdering 13 Hazaras, something the group staunchly denied.
The Taliban took control of Afghanistan after foreign forces withdrew from the country at the end of August following a deal agreed with the US.
It came two decades after US forces had removed the militants from power in 2001.