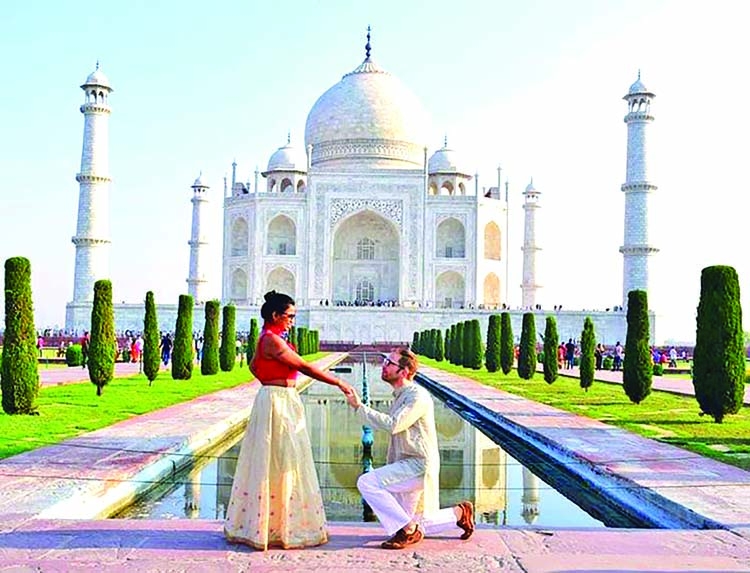 ''I tried to get out of the sea, but the current was too strong. Through the waves, I saw a man swimming up to me. I recognized him; we were staying in the same yoga retreat. He tried to reach me, but I kept getting pulled back into the sea. Then I saw him climb a big rock and wave for help.
A minute later, I was rescued. When I was ashore, I saw his back was bruised-I couldn't believe this man risked his life to save mine! I ran to a store and picked up some disinfectant and ice cream as a 'thank you.' He laughed and said, 'Don't worry, I'm fine' there was an instant connection.
He told me that his name was Attila-he lived in Amsterdam but was in Goa for the retreat. We started having meals together and spoke about our work and families. One night, while strolling, we both leaned in and kissed; it was magical! After a week, when it was time to say goodbye, I was happy to have met someone special, but was unsure of where it would go from there.
I went back home to Kerala; he called everyday. 2 weeks later, he called me at night and said, 'I've been thinking about us a lot...I think we should give our relationship a shot.' I could feel my heart beating through the phone; I said 'yes!' But I knew how long-distance relationships fizzle out, so I told him that we'd have to spend more time together. We agreed to meet in Dubai, midway between Europe and India. But while I was making arrangements for the trip, my mother got diagnosed with a brain tumor. So, I flew to Lucknow to be with her.
Attila would call to check on me-he really cared. Then one day, when I got really emotional on call, he calmed me down, and said, 'I'm coming to India to be with you.' I couldn't believe it! At the airport, I ran towards him and hugged him tight; it was everything! I'd never felt so secure before. A few days after Mom's surgery, I introduced him to her; she adored him!
Humans of Bombay, Fb