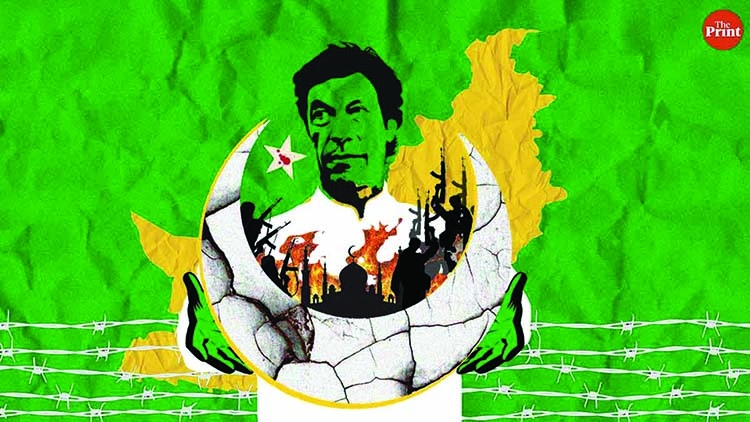 Pakistan has always been witnessing military misadventures since its inception 74 years ago. The country was hardly 11 years old, when its Commander in Chief, General Ayub Khan (laterthe Field Marshal) imposed Martial Law on October 7, 1958, abrogated the Constitution, disbanded the national and provincial assemblies, and outlawed all political parties.
His partner in this crime was no other than President of Pakistan, Iskandar Mirza. The irony of history is that within twenty days of assuming absolute power, Ayub Khan usurped position at the helm and sent Iskandar Mirza packing into exile and eventually into oblivion. Such is the travesty of the history of Pakistan.Again, not in the strictest military terms, country's first Prime Minister, Liaqat Ali Khan was killed in the early years of Pakistani independence.
Subsequently, history chronicles that there had been intermittent coups and counter coups by the politically ambitious and power-hungry armed forces which saw military take overs intermittently and long spells of despotism and military rules perpetrated by Gen Zia ul Haq and Gen Pervez Musharraf to name a few. So, military role in meddling into a civilian government has always been more a rule than exception in Pakistan.
The preceding paragraph sets the tone for perhaps a more in-depth study by the Pakistan watchers on the most recent reshuffle in Pakistan's all-powerful military. In a significant shakeup, many senior army officers have undergone shifting from various critical positions. Most important, however, has been the appointment of Lt Gen Nadeem Ahmad Anjum as the Director General (DG) of the omnipotent Inter-Services Intelligence (ISI). Equally crucial happening is the posting of Anjum's immediate predecessor, Faiz Hameed as the new Corps Commander, based inPeshawar.
It seems imperative to point out that Gen Hameed enjoys close proximity to Prime Minister, Imran Khan and was the most important player in handling the Taliban and the new Afghan cabinet during the critical juncture of the Taliban assuming power and placement of Pro Pakistan and anti-Indian elements in the cabinet including of Sirajuddin Haqqani of the notorious Haqqani network as the Afghanistan's interior minister.
This illustration shows the extent of power enjoyed and exercised by Gen Faiz Hameed. His fresh posting in Peshawar may leave him without unbridled powers he had as the DGISI but based in closer proximity to Afghanistan, will give him an opportunity to stay in touch with Afghan political players on the ground happenings.
Further, as Corps Commander Peshawar, Hameed will be able to politick more vigorously keeping an eye on the post of Army Chief of Pakistan which falls vacant in November 2022 when present incumbent Gen Qamar Ahmad Bajwa hangs his boots.However, this said, the race is not expected to be a cake walk.
Gen Anjum, as the new DG ISI, is planning to stay in the fray to grab the top and most powerful position.Meanwhile, speculation is also rife that appointment of Lt Gen Azhar Abbas as the Chief of General Staff in Army Chief Gen Bajwa's office makes him yet another strong contender for the chiefship. His new mandate gives him active access to intelligence and operational matters which is crucial.
An officer of the Baluch regiment, he is also likely to prevail over the DGMO with a well-known fact in the public domain that he is closest to Bajwa making the tussle of next year fiercer and more cutthroat. Though it's a year away, yet given the domestic and international (especially in the light of declining US - Pakistan ties) tumult which Pakistan is afflicted with now, things could be very challenging as the date gets closer. This certainly deserves a very close watch.
Meanwhile, in another Pakistan related development which merits mention is the mounting of scathing criticism of the current Pakistani government by a section of the powerful and influential print media. Influential because it shapes public opinion.Basically, the assessment by one Dr Niaz Murtaza, a prominent newspaper columnist, which appeared recently in the 'Dawn', states that euphoria, which is largely self-generated in Pakistan has always been short lived.
For example, the chest thumping Taliban victory on August, 15 in Afghanistan, was rejoiced beyond measure and the military in particular was gung ho, more because of self-perceived feeling of defeat of the pro India Afghan forces. But soon it vanished into thin air. Even nearly two months after Taliban's win, China or Russia have not till date recognized the Taliban regime.Hence, short lived again.
These happenings apart, Dr Murtaza opines while forecasting that the Naya Taliban is in no mood to change their savage, medieval ways like the inhuman treatment meted out towards women and children. Such mal governance may cause serious economic and security collapses with huge spillover effects in Pakistan. This is a clear warning as it will also have a cascading impact on the prevailing domestic political tensions in Islamabad. Perhaps without any exaggeration, the columnist describes it as 'gatheringstorm'.
Future of Afghanistan and Pakistan, therefore, looks to be troubled on both sides of the Durand Line. It's hoped Imran Khan the Prime Minister, the current military dispensation particularly the new ISI chief and his worthy predecessor nurturing ambitions to be the Army Chief next year are reading the message between the lines. They are loud and clear meriting to be heeded or else things could be irretrievable.


Shantanu Mukharji is a retired IPS officer, a security analyst and a former National Security Advisor to the Prime Minister of Mauritius