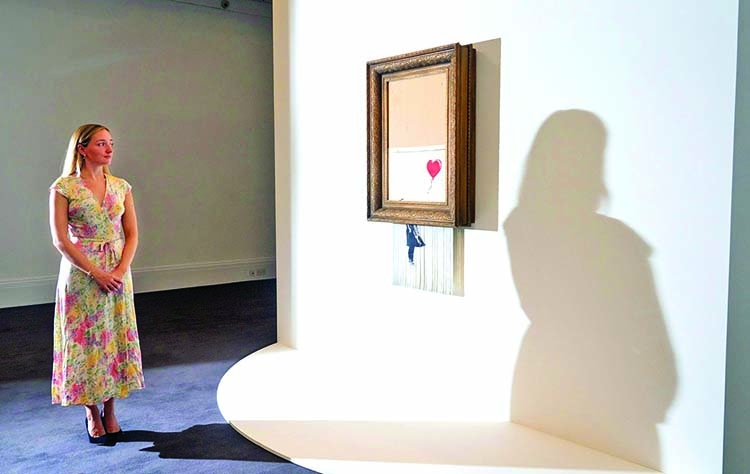 A partially shredded canvas of one of Banksy's most celebrated works sold at auction in London on Thursday for o18.58 million ($25.38 million), a new record for the British artist, three years after the artwork was bought for a fraction of that price.The artwork -- now called "Love is in the Bin" -- sold for nearly o1.1 million at the same Sotheby's auction house location in October 2018, before it dramatically passed through a shredder hidden in the large Victorian-style frame moments later.
The surreal prank was orchestrated by the elusive and irreverent Banksy, whose identity is said to be known to only a handful of friends, and caused a global sensation.Thursday evening's sale, which saw nine bidders battle for around 10 minutes for the work formerly called "Girl With Balloon", beats the previous record of o16.75 million set for Banksy in March.
Bidding for "Love is in the Bin" quickly climbed from the starting price of o2.5 million, with auctioneer Oliver Barker revelling in the drama."I can't tell you how terrified I am to bring down this hammer," he said as the final bid went unchallenged.The work was reportedly sold to a private investor. The seventh lot in a wide-ranging contemporary arts offering, it had an estimated selling price of between o4-6 million.
"It is almost three years to the day since one of the most ingenious moments of performance art this century made auction history," Alex Branczik of Sotheby's said following the record haul."Banksy is no stranger to making headlines and this latest chapter in his story has captured imaginations across the world -- we can only begin to guess what might come next."
The 2018 stunt, which poked fun at the traditionally staid world of fine art, is typical of the graffiti artist's disruptive style evident since his work first began appearing on the streets of Bristol in southwest England in the 1980s.It was the latest in a long history of unpredictable moves for the provocative guerilla artist, whose work has appeared across Britain and around the world.
The part-shredded canvas, bought in 2018 by an unnamed European woman and exhibited for a month at a museum in Germany in 2019, depicts a small child reaching up toward a heart-shaped red balloon.The original, which first appeared on a wall in east London, has been reproduced endlessly in prints and online, and appropriated by some of the world's best-known brands.
It had been called one of the most significant artworks of the early 21st century in the British press, before the shredded version was granted a new certificate and date by Pest Control, Banksy's authentication body, and given the new title.Banksy's latest works have appeared in several British seaside towns over the summer, with the country's most famous street artist confirming they were his creations in an Instagram video entitled "A Great British Spraycation".
It showed him taking a summer road trip in a beat-up camper van with cans of spray paint stashed in a cooler.In recent years, he has kept the attention of the contemporary art world with his social commentaries and causes -- migrants, opposition to Brexit, denunciation of Islamist radicals -- while still stirring the excitement of the moneyed art markets.In March, the work that had broken his previous sales price record honoured caregivers during the coronavirus pandemic, with the proceeds donated to the state-run National Health Service (NHS).
The painting, "Game Changer", sold to an unnamed buyer for o14.4 million plus costs after fierce bidding at Christie's auction house in London.Contemporary art auctions have rebounded to an all-time high over the last year, boosted by online sales and the arrival of digital art in the form of "NFTs", an annual report by Artprice said on Monday.