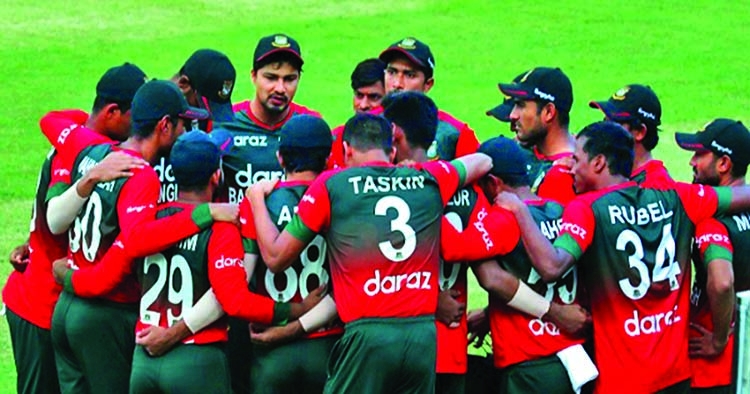 Putting behind their disappointing performance in the warm-up games, Bangladesh are keen to make a winning start to the Twenty20 World Cup as they take on Scotland today (Sunday) at Al Amerat Cricket Ground in Muscat, Oman.  The match starts at 8 PM (Bangladesh Standard) and will be aired live on Gazi TV and T Sports. It will be Bangladesh's first match in Group B which looks set to be hotly contested in the first round of the ICC Men's T20 World Cup 2021 as apart from Bangladesh and Scotland, Oman and Papua New Guinea also battle it out to qualify for the Super 12.
The teams will play each other once in a round-robin format from 17-21 October, with the top two advancing into the next stage. Bangladesh qualified by virtue of their world ranking and entered as favourites to top the group.  Scotland basically are the main opponent of Bangladesh in their Group B of first round, considering their strength and cricket tradition.
They also will be high on confidence following their win against Netherlands and Namibia in the two official practice games. Scotland earlier met Bangladesh just once in this format in 2012 at Hague, Netherlands and won that game by 34 runs thanks to a 58 ball-100 of Richie Berrington, who is still a key player of the side.
The Tigers indeed left the country high on confidence, following their seven wins in the last 10 games against teams like Australia and New Zealand. Beforehand, they also won a three-match series against Zimbabwe by 2-1 in Zimbabwe. Even though they won their maiden T20 series against Australia and New Zealand at home in a designed pitch, the team management argued the winning spree would keep Bangladesh bolstered psychologically.
This seemed to work well when they crushed Oman A team in a practice game, putting up score above 200. But after two defeats in ICC organized official practice games, things look ominous for Bangladesh. Bangladesh's four-wicket defeat to Sri Lanka though could be defendable, they looked out-of-sort and jaded in excellent batting pitch against Ireland before losing it by 33 runs. Ireland put up 177-3 before restricting Bangladesh to 144-7.
The defeat at the hands of the Irish not only was disappointing but also is believed to cause a huge mental breakdown. Apart from Soumya Sarkar and Nurul Hasan Sohan, no batsmen could show their consistency while in bowling fast bowler Taskin Ahmed only looked like a bowler to cause some trouble for the batsman in benign pitch.
The most disappointing figure is fast bowler Mustafizur Rahman, who looked like an ordinary bowler when his cutter and slower delivery didn't work. Bangladesh will hope that the return of regular Mahmudullah Riyad and ace allrounder Shakib Al Hasan would bolster their batting and bowling. Mahmudullah skipped the practice matches due to his back pain while Shakib was busy with IPL commitments.
Shakib had already joined the team bubble in Oman after the IPL final which his side Kolkata Knight Riders (KKR) lost to Chennai Super Kings. However the Tigers' stat in T20 cricket is not up to the mark. They so far played 113 matches and won 41. They had lost a staggering number of 70 matches while two matches fetched no result.  The Tigers so far played 25 matches in the World Cup of this shortest version of cricket and won just five-four of which came in the qualifying round. They won only one match against the West Indies in the tournament proper.
Squad
Mahmudullah Riyad (Captain), Naim Sheikh, Soumya Sarkar, Liton Das, Shakib Al Hasan, Mushfiqur Rahim, Afif Hossain, Nurul Hasan Sohan, Shak Mahedi Hasan, Nasum Ahmed, Mustafizur Rahman, Shoriful Islam, Taskin Ahmed, Mohammad Saifuddin, Shamim Patwari, Rubel Hossain.