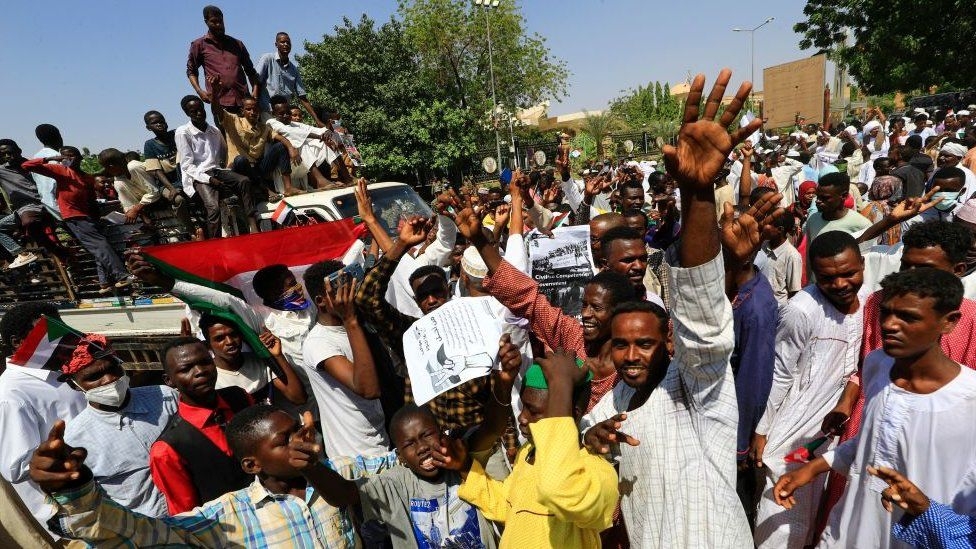 Opponents of Sudan's transition to democracy took to the streets of Khartoum on Saturday to call on the army to take control of the country.
Several thousand demonstrators gathered outside the presidential palace as the country's political crisis deepens.
Military and civilian groups have been sharing power since the toppling of President Omar al-Bashir in 2019.
However, tensions have grown since a coup attempt attributed to followers of Mr Bashir was foiled in September.
Since then, military leaders have been demanding reforms to the Forces of Freedom and Change (FFC) coalition, a civilian alliance which led the anti-Bashir protests and formed a key part of the transitional government. The armed forces have also called for the replacement of the cabinet.
However, civilian leaders say that the demands are part of a power grab from the armed forces.
On Saturday, pro-military demonstrators chanted "down with the hunger government" and called for General Abdel Fattah al-Burhan, head of the armed forces and Sudan's joint military-civilian Sovereign Council, to instigate a coup and seize control of the country.
"We need a military government, the current government has failed to bring us justice and equality," one protester told AFP.
Unlike previous demonstrations in the country, protesters were allowed to reach the gates of the presidential palace and there was little police presence.
Pro-government protesters have also called a rally on Thursday in response to Saturday's demonstrations.
On Friday, Sudan's civilian Prime Minister, Abdallah Hamdok, unveiled a plan to tackle what he called the country's "worst and most dangerous" political crisis in its two-year transition.
"I am not neutral or a mediator in this conflict. My clear and firm position is complete alignment to the civilian democratic transition," he said.
Mr Hamdok was sworn in as Prime Minister in August 2019, after mass protests saw the military step in and end the 30-year-rule of Omar al-Bashir in April.
But support for the transitional government has slumped in recent months as economic reforms spearheaded by Mr Hamdok have seen fuel subsidies slashed and inflation soar.