Volunteers in the sky watch over migrant rescues by sea 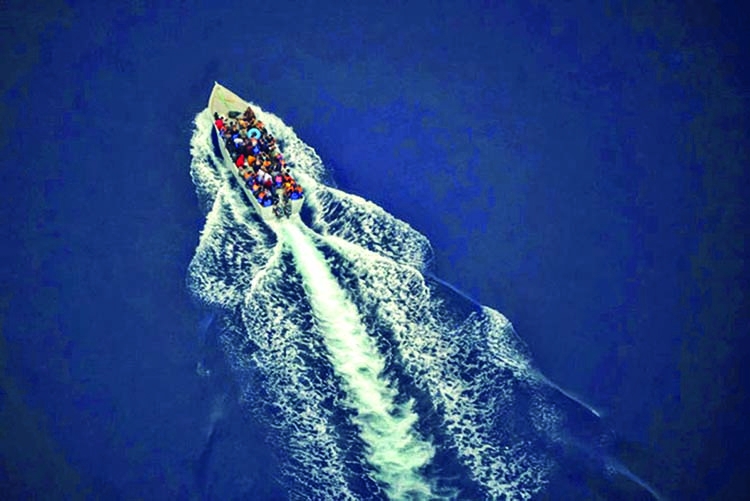 Migrants navigate on an overcrowded wooden boat in the Central Mediterranean Sea between North Africa and the Italian island of Lampedusa, Saturday, Oct. 2, 2021, as seen from aboard the humanitarian aircraft Seabird. -AP
As dozens of African migrants traversed the Mediterranean Sea on a flimsy white rubber boat, a small aircraft circling 1,000 feet above closely monitored their attempt to reach Europe.The twin-engine Seabird, owned by the German non-governmental organization Sea-Watch, is tasked with documenting human rights violations committed against migrants at sea and relaying distress cases to nearby ships and authorities who have increasingly ignored their pleas.
On this cloudy October afternoon, an approaching thunderstorm heightened the dangers for the overcrowded boat. Nearly 23,000 people have died or gone missing in the Mediterranean trying to reach Europe since 2014, according to the United Nations' migration agency. "Nour 2, Nour 2, this is aircraft Seabird, aircraft Seabird," the aircraft's tactical coordinator, Eike Bretschneider, communicated via radio with the only vessel nearby.
The captain of the Nour 2, agreed to change course and check up on the flimsy boat. But after seeing the boat had a Libyan flag, the people refused its assistance, the captain reported back on the crackling radio. "They say they only have 20 liters of fuel left," the captain, who did not identify himself by name, told the Seabird. "They want to continue on their journey."
The small boat's destination was the Italian island of Lampedusa, where tourists sitting in outdoor cafés sipped on Aperol Spritz, oblivious to what was unfolding some 60 nautical miles (111 km/68 miles) south of them on the Mediterranean Sea.
Bretschneider, a 30-year-old social worker, made some quick calculations and concluded the migrants must have departed Libya approximately 20 hours ago and still had some 15 hours ahead of them before they reached Lampedusa. That was if their boat did not fall apart or capsize along the way.