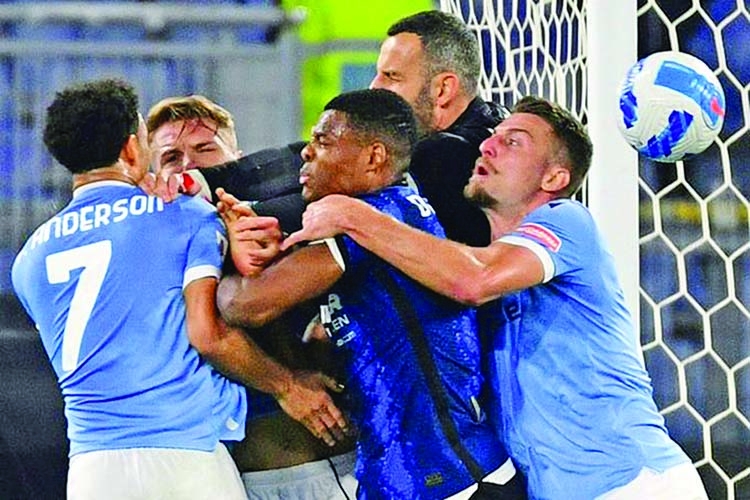 Inter Milan were furious after Felipe Anderson's goal. -AFP
Reigning champions Inter Milan suffered their first Serie A defeat of the season as they lost a bad-tempered game 3-1 to Lazio on Saturday, while AC Milan fought back from two goals down against Verona to go top of the table.Inter were incensed after Felipe Anderson tapped home a rebound in the 81st minute to put the hosts 2-1 ahead at the Stadio Olimpico, with the visiting players angry that Lazio had not stopped play due to Federico Dimarco being down injured.
But Lazio were under no obligation to stop and Dimarco had hit the floor before Inter continued attacking themselves.Five yellow cards were dished out in the aftermath as the away side's protests stopped play for several minutes, with visiting full-back Denzel Dumfries perhaps lucky to only be booked.
It was a miserable return to the capital for away coach Simone Inzaghi, who left Lazio in the close-season to replace Antonio Conte at Inter.His Lazio replacement, Maurizio Sarri, has often been criticized in the early weeks of the campaign, but the three points take his new team into fifth place."(We) conceded a strange second and lost our heads," Inzaghi told DAZN.
"That should not happen, because the referee can let play continue and there were 10 minutes plus stoppages to go, we should've kept playing."The third goal was the worst, as we were not defending properly and switched off. We lost our focus and there was still time to make up for the second goal until then."Inter remain third and could slip seven points behind Napoli when they put their 100-percent record on the line against Torino on Sunday.AC Milan took first place overnight, though. as Zlatan Ibrahimovic made his return from injury as a substitute in a dramatic 3-2 victory over Verona.
- Lazio fight back -
In Rome, Inter made the breakthrough in the 20th minute as Albanian full-back Elseid Hysaj clipped Nicolo Barella and Ivan Perisic stepped up to score for the second time this season.But Lazio deservedly drew level in the 64th minute, after Alessandro Bastoni handled inside the area.Immobile made no mistake with the penalty to net his seventh league goal this term and move above Inter striker Edin Dzeko at the top of the scoring charts.The controversial moment came with nine minutes remaining as Dimarco went down holding his chest after appearing to be fouled in the centre circle.
But the referee waved play on and Inter's attack ended with Lautaro Martinez shooting straight at Reina, who started a quick counter-attack. Immobile's shot was saved by goalkeeper Samir Handanovic, with Anderson tapping in the follow-up. Dumfries and Handanovic responded angrily, with the Dutch wing-back almost ripping the apologetic Anderson's shirt."There's no debate," Sarri said.
"Dimarco was down and Inter went to have a shot on goal."Matteo Darmian became the sixth Inter player to be yellow-carded in injury time, and Sergej Milinkovic-Savic nodded in the resulting free-kick from Luis Alberto's delivery to seal the win.Inzaghi's well-beaten champions continued to rage after the final whistle as Lazio celebrated.Lazio defender Luiz Felipe was left in tears after being shown a red card for appearing to jokingly jump on former teammate Joaquin Correa, who reacted angrily.
---AFP