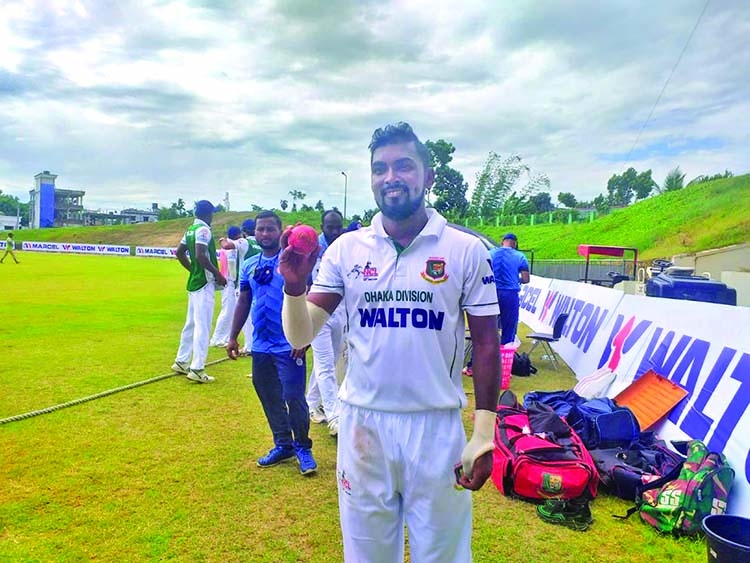 Left-arm spinner Nazmul Islam Opu completed his career-best 10-64 as Dhaka Division closed in on victory against Sylhet Division in their first round game of the Bangabandhu National Cricket League (NCL) at Sylhet Academy Ground on Monday.
Resuming the day on 35-1, Sylhet were bowled out for 174 in their second innings, leaving Dhaka to require only 66 runs to win the game. At the close of the second day, which was affected by rain, Dhaka reached 48-3 which meant they need only 18 runs to win the game.
Opu who grabbed 6-23 in the first innings, played a key role in denting Sylhet with 4-41 in the second innings also. Amit Hasan of Sylhet only could make some resistance, hitting 76 while opener Imtiaz Hossain made 43. Sylhet earlier was shot out for 67 in their first innings while Dhaka put up 176 before being all out, to gain a 109-run lead that proved to be decisive. In another game of the NCL Tier-1, reigning champions Khulna Division and Rangpur fought neck to neck at Sylhet International Cricket Stadium.
On the rain-marred second day, resuming the day on 226-8, Rangpur were wrapped up for 257 after while Khulna reached 171-4 at the close of the day 2.

Opener Anamul Haque Bijoy was batting on 72 with Mehidy Hasan Miraz on 17.