Wounded Tigers face Oman in 'do or die' game today 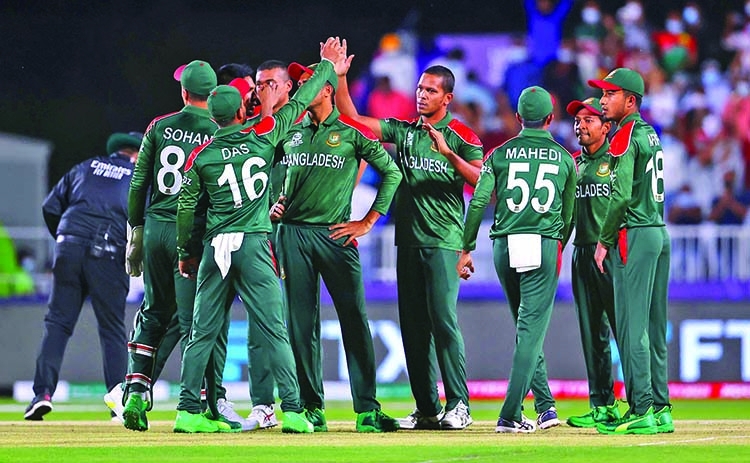 Bangladesh cricket team players celebrate a wicket against Scotland. -BCB
Bangladesh are keen to hit back into winning way in a bid to keep their Super 12s hope alive as they face off co-hosts Oman in their second game of the Group B in the Twenty20 World Cup today (Tuesday) at Al Amerat Cricket Ground in Muscat.
The crucial game starts at 8 PM (Bangladesh Standard Time) and will be aired live on Gazi TV and T Sports. This second game was supposed to be Bangladesh's match to ensure their Super 12s berth with a match to spare but instead, they now face a battle of survival.
The shocking six-run defeat to Scotland in the first match put them in such miserable situation and changed the whole equation. A defeat against Oman would almost shatter their dream to play the Super 12s. Ahead of the World Cup, Bangladesh though won the series against Australia and New Zealand back at home in a slow and low track, the cricket pundits around the world cautioned that playing in such wicket may backfire in World Cup. Bangladesh team management argued that winning habit would keep them going but pundit's speculation was justified preciously. The Scotland should be no match for Bangladesh even though the Scottish side won the only match between the two teams in this format in 2012. But they were more energetic than Bangladesh in the game as they recovered from a tricky 53-6 to amass 140-9 and later restricted Bangladesh to 134-7.
The surface was entirely good for batting but Bangladesh's habit of batting in slow track made them scratchy in this wicket. After the openers fell for cheaply, the experienced duo like Mushfiqur Rahim and Shakib Al Hasan were batting extremely slowly as if they were batting in slow pitch. After the dismissal of Shakib and Mushfiqur, Bangladesh still had the chance to close out the game as Mahmudullah Riyad was there in the crease but he also had already grown the habit of batting slowly.
However Mahmudullah admitted they need to play aggressive brand of cricket in this type of wicket, blaming batting for their downfall in the first game. He also indicated that ahead of the crucial game against Oman, that is now 'do or die' match for them, they need to mull some changes.
"Our batting is a concern. We have to bat better. We have to play aggressive cricket, regardless of the situation. We have a deep batting line- up, with Mohammad Saifuddin at No. 9. We may need to think over some changes tomorrow. "We didn't deliberately bat slowly. We couldn't hit those boundaries. We have to bat better next time. A lot of things will come up since we lost the game. I think we didn't play well today, but we are a good T20 team. We have the capability. When we play our best cricket, we can win games."

Bangladesh met Oman just once in this format in qualifying round match in 2016 T20 World Cup and won that game comprehensively by 54 runs through D/L method, thanks to a 63 ball-103 not out of Tamim Iqbal, who withdrew his name this time from the World Cup squad. That remains the only century for Bangladesh in this format.
While Bangladesh would be down in confidence after losing three straight matches, including two official practice matches against Sri Lanka and Ireland, Oman is high on confidence, following their 10-wicket win against Papua New Guinea in the first match. As they are playing at their own den, they are also believed to get home advantage.
But Mahmudullah said Tigers would leave no stone unturned as the Super 12s berth is at stake. However the Tigers' stat in T20 cricket is not up to the mark. They so far played 114 matches and won 41. They had lost a staggering number of 71 matches while two matches fetched no result.
They so far played 26 matches in the World Cup of this shortest version of cricket and won just five-four of which came in the qualifying round. They won only one match against West Indies in the tournament proper.
Squad: Mahmudullah Riyad (Captain), Naim Sheikh, Soumya Sarkar, Liton Das, Shakib Al Hasan, Mushfiqur Rahim, Afif Hossain, Nurul Hasan Sohan, Shak Mahedi Hasan, Nasum Ahmed, Mustafizur Rahman, Shoriful Islam, Taskin Ahmed, Mohammad Saifuddin, Shamim Patwari, Rubel Hossain.