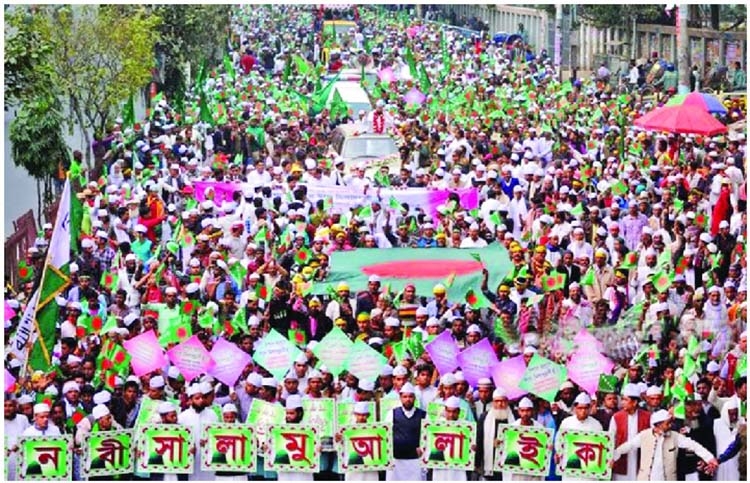 Muslims bring out procession marking the day of birth and demise of Prophet Hazrat Muhammad (SM) in Dhaka. -File Photo
Eid-e-Miladunnabi is one such festival that is very important for the believers in Islam. Rabi al-awwal which is considered the third month of the Islamic calendar, has begun. On the 12th of this month, the last prophet, Hazrat Muhammad (SM), was born. Prophet Hazrat Mohammad (SM) is the center of reverence for Muslims settled all over the world, so the day of his birth is believed to be very special in Islam.
This day is celebrated with great pomp around the world, especially in the Indian subcontinent. According to the English calendar, this time the birthday of Prophet Hazrat has fallen today. Prophet Muhammad (SM) is believed to be born in around 570 CE in Makkah, Saudi Arabia. He was the last messenger of Allah (SW) who spread the message of love and unity for all the human beings. This day gained popularity in the 8th century when the prophet's house was converted into a prayer hall. Unlike now, the day was observed in a very different form.
Prophet Hazrat Muhammad Sallallahu 'alahi wa Sallam's mother's name was Amina Bibi and his father's name was Abdullah. It was Prophet Hazrat Mohammad (SM) to whom Allah (SW) first gave the Holy Quran to the people. Hazrat Muhammad preached that only one who believes in humanity is great.
The birthday or birth celebration of Prophet Hazrat Mohammad (SM) is celebrated as Eid-e-Miladunnabi. Prayers are held for the whole night on Eid-e-Miladunnabi, and processions are also taken out. On this day, the followers of Islam read the holy words of Hazrat Mohammad (SM). People read the Holy Quran in mosques and homes and are inspired to follow the path of righteousness as told by the prophet.
The history of Eid-e-Miladunnabi goes back to the early days of Islam when people gathered to read poetry and sang verses to honor Prophet Muhammad (SM). The Prophet's life and teachings, as reflected in the Hadith, continue to influence believers.
Houses are decorated on the birthday of Prophet Hazrat Mohammad (SM), and these special decorations are done in mosques. Along with reading his messages, there is a practice of donating to the poor. Charity or Zakat is considered very important in Islam. It is believed that Allah is pleased with helping the needy and poor people.
The celebrations of Eid-e-Miladunnabi became more popular during the 11th century and it was first celebrated as an official festival in Egypt. During this period, only Shia Muslim, who were the ruling tribe in the region could celebrate the festival and the festivities were not extended to the general public. In the 12th century, countries other than Egypt such as Syria, Morocco, Turkey and Spain, started celebrating Eid-e-Miladunnabi. And soon, Sunni Muslims too started celebrating the day.
While a lot of Muslims across various countries religiously follow this day, there are many who believe that the birthday of the Prophet is not exactly known and that it does not exist. They are of the view that any festival other than Eid Ul Fitr and Eid ul Adha is a sort of Biddah or innovation in the religion.

The writer works at The Asian Age.