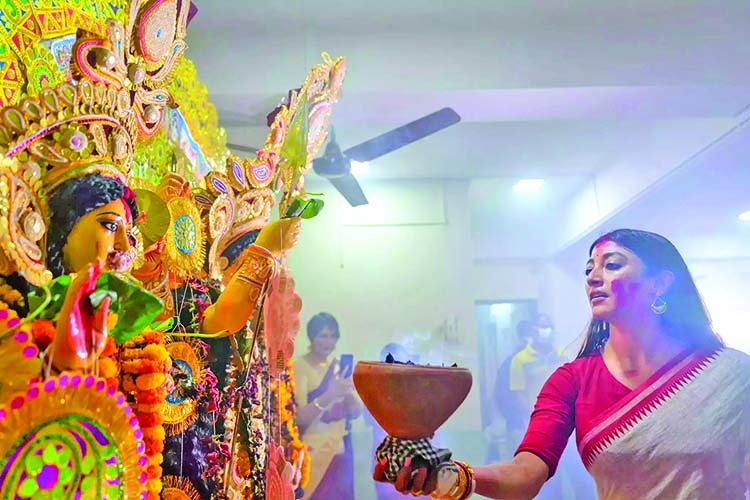 Just like Durga Puja brings a slice of Kolkata to all over India the iconic dhunuchi naach during Dashami defines the spirit of celebration. It's not just a dance form for Bongs, but a crucial part of their prayers and every year, just like any other Bengali, several Tollywood celebs perform dhunuchi naach. Paoli Dam, too, is no exception.
On the day of Bijaya Dashami, the versatile actress was spotted offering her prayers to Ma Durga through dhunuchi naach at a puja pandal and she performed the elegant dance with grace.  The rising tempos of the Dhakis surely made the dance more intense, as we can see Paoli swaying to the beats of the Dhakis while holding a dhunuchi on her hand.
The smoke of dhuno that emits from the dhunuchi or the clay pots often intoxicates the devotees. It indeed removes all those negativities and brings in so much positive energy.
On the work front, Paoli has two Bengali films in her kitty right now; one is 'Khelaghar', a relationship tale revolving around a modern crisis, directed by Leena Gangopadhyay and Saibal Banerjee and the other one is Srijit Mukherji's 'Lawho Gouranger Naam Re', based on Chaitanya Mahaprabhu. While 'Khelaghar' stars Dev and Srabanti Chatterjee alongside Paoli, 'Lawho Gouranger Naam Re' will also see Parambrata Chattopadhyay and Anirban Bhattacharya in the cast. Paoli was last seen in the Avinash Das directed Hindi thriller 'Raat Baaki Hai' co-starring Annup Sonii, Rahul Dev and Dipannita Sharma in key roles.