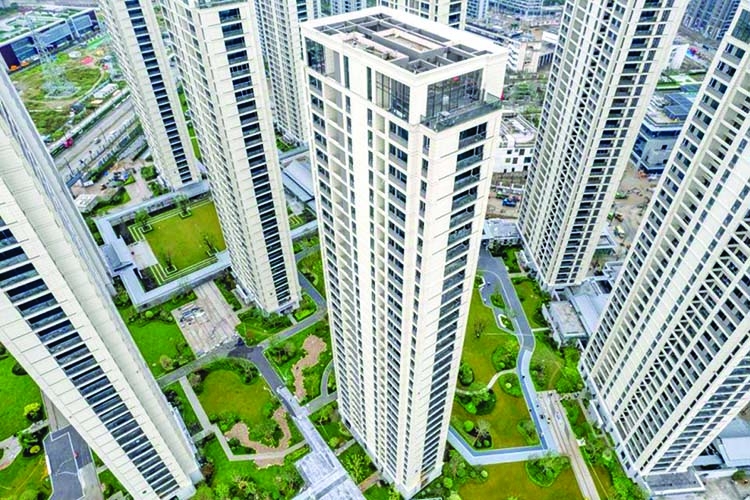 China's real estate and construction sectors shrank in the third quarter for the first time since the early stage of the pandemic, official data showed Tuesday, as they face increasing pressure from a sprawling crackdown on the country's ailing property industry. The figures come a day after figures showed the world's second-biggest economy grew slower than forecast in the same period owing to the regulatory tightening as well as an energy crunch.Real estate output shrank 1.6 percent on-year, the National Bureau of Statistics (NBS) said in a report breaking down changes in gross domestic product.
The reading marks the first contraction since the first three months of 2020 -- when China's Covid-19 outbreak was at its height -- and a reverse from its 7.1 percent growth in April-June. At the same time, output from construction slipped 1.8 percent, the report said, also representing its first decline since the first quarter of last year. Before the pandemic, China's construction sector had never shrunk since at least 1992 when data started being collected, according to data cited by Bloomberg News.
Property and construction are pillars of the Chinese economy, underpinning other important sectors such as commodities and furnishings. But they have taken a hit as Beijing wages a regulatory clampdown on the real estate sector, including by tightening rules on lending. The move comes against the backdrop of a $300 billion debt crisis at China Evergrande -- one of the nation's biggest property developers -- that has hammered investor sentiment and fuelled fears of a spillover into the wider economy. China's central bank has said the risk of contagion is "controllable" and Evergrande will be able to resume unfinished projects. Tuesday's report also showed growth in China's manufacturing output slowed to 4.6 percent in the third quarter, down from 9.2 percent in the previous three months, as production curbs at factories battling ongoing energy shortages began to bite. At a news briefing Monday, NBS spokesman Fu Linghui said "current international environment uncertainties are mounting and the domestic economic recovery is still unstable and uneven".