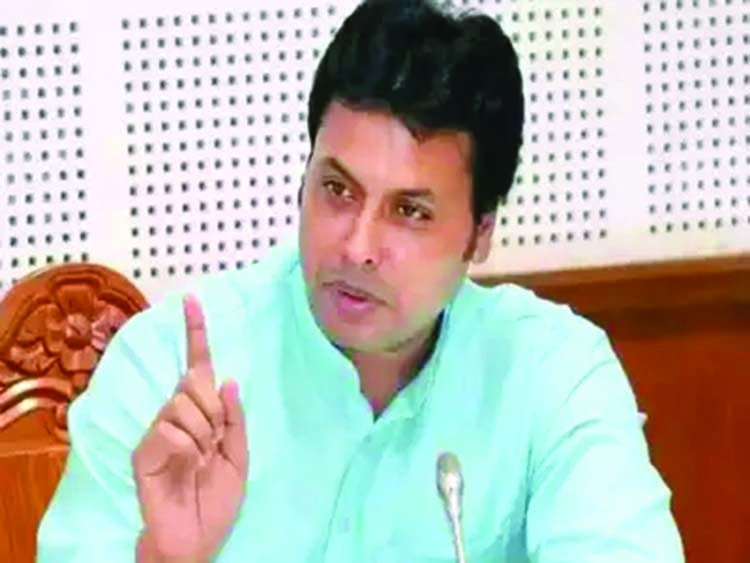 Indian state Tripura Chief Minister Biplab Kumar Deb on Tuesday expressed concern at purported attacks on religious minorities in neighboring Bangladesh and said he feels these are part of a concerted conspiracy to damage the India-Bangladesh relations.
At least six people were killed and hundreds injured in communal violence and mayhem that took place during the Durga Puja celebrations in Bangladesh last week. Speaking to reporters at the Maharaja Bir Bikram (MBB) Airport in the morning, Deb said: "Indo-Bangla friendship is no less than an example to the world. These things are being done as part of a conspiracy to damage that example. We severely condemn these incidents. We are confident that the Bangladesh administration will take strict action on these incidents", The Indian Express reports.
Terming the attacks on minorities in Bangladesh "concerning", "painful" and "shameful", the CM said fundamentalist forces hatched a conspiracy to attack cultural and religious institutions during Durga Puja and after it.
"A person arrested by the Bangladeshi administration for these incidents has links with a fundamentalist organization. Since it is already proven, why are there attacks on minority communities there? It is clear that these attacks are planned as part of a conspiracy", he said.
Deb, who shares close personal connection with Bangladesh PM Sheikh Hasina, said, "Indo-Bangla relation isn't something new. Earlier too, some conspirators wanted to damage the relations with India. Those people are doing these things. But the common people of Bangladesh are not like this. The Bangladesh PM has a good relation with us. I'm sure the Bangladesh administration will take all necessary steps".