Protest in London over attacks on Hindus in BD 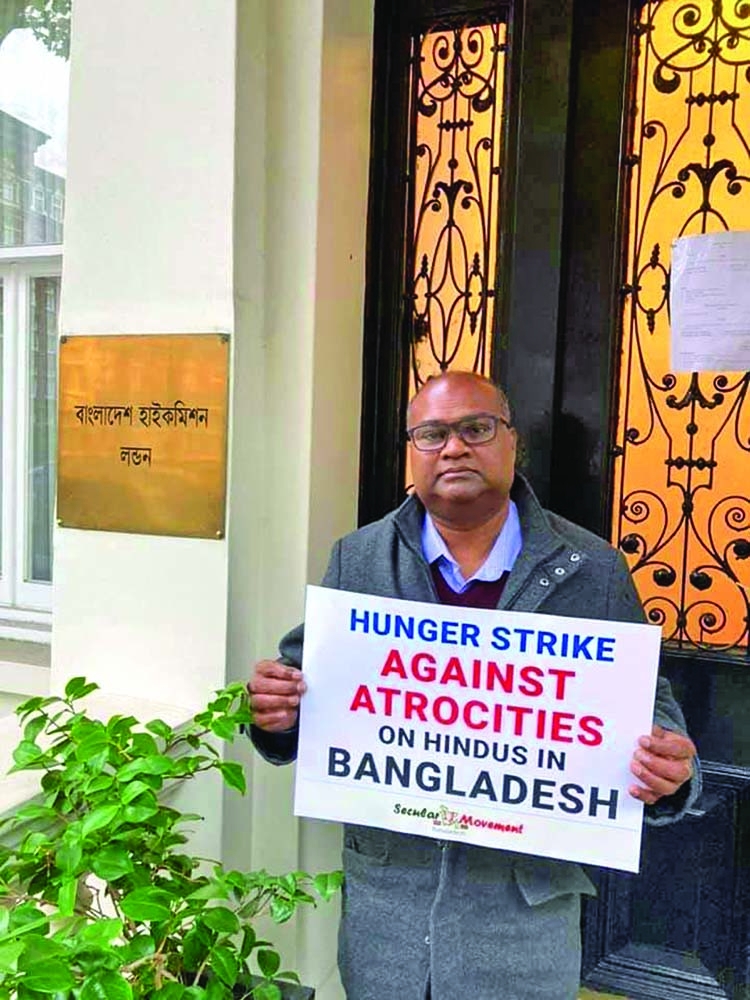 Pastor Kajal Sarker, General Secretary of Secular Bangladesh Movement, UK Protest in London over attacks on Hindus in Bangladesh. -Collected
Pastor Kajal Sarker, General Secretary of Secular Bangladesh Movement in the United Kingdom is observing a hunger strike in London in front of Bangladesh High Commission over communal attacks on Hindus in Bangladesh.
The Secular Bangladesh Movement puts forward the following demands.
a) Immediate public apology from Bangladesh government for not protecting Hindus during their most sacred celebration of the year.
b) Accountability and Prompt Action from the Police and Administration to protect all Hindu celebrations, life and possessions.
c) Non-partial justice for and proper compensation toward all the Hindu victims of the atrocities committed last week.
d) Enforcement of the minority protection act and trial of all culprits, considering their crime as a kind of extremist terrorism.
e)      Half-mast national flag at the high commission's premises to express grief and solidarity to those innocent victims.
f)       The practice of Pseudo Blasphemy Act against Hindus by abusing digital security act should be stopped.
g)      Education Curriculum at each level should be reformed in light of secular and humanitarian philosophy to create a tolerant and liberal young generation.
h)      The secular character of the state should be strengthened through the full reinstating of the 1972's constitution and all religious minorities must be given the freedom of expression and right to practice their own religion.