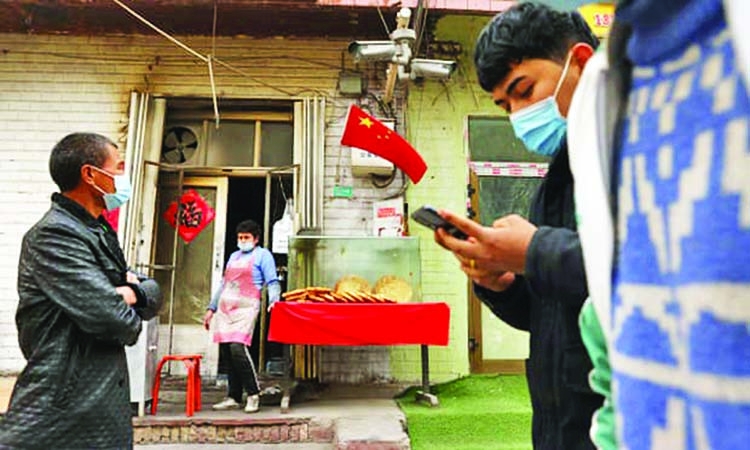 A vendor selling naan bread waits for customers on a street under surveillance cameras in Shule county, Xinjiang. -AP
Authorities in the Chinese region of Xinjiang are using predictive policing and human surveillance to gather "micro clues" about Uyghurs and empower neighborhood informants to ensure compliance at every level of society, according to a report.
The research by the Australian Strategic Policy Institute (ASPI) thinktank detailed Xinjiang authorities' expansive use of grassroots committees, integrated with China's extensive surveillance technology, to police their Uyghur neighbors' movements - and emotions, The Guardian reports. The findings shed further light on the extraordinary scope of the Chinese Communist party's grip on the largely Muslim and purportedly autonomous region, going beyond police crackdowns and mass arrests to ensure total control.
The report also revealed the identities of officials - including two former visiting fellows at Harvard University - and the organizations that make up the political architecture of the years-long crackdown by Beijing on Uyghurs, which rights organizations say has included the detention of an estimated 1 million people in re-education camps.
The report said the nominally voluntary local committees mirrored the Mao-era "revolutionary neighborhood committees", with daily meetings delegating home visits and investigations and assessing whether any individuals require "re-education".
However, according to ASPI, leaked police records showed the modern-day committees also received "micro clues'' from China's predictive policing system, the integrated joint operations platform (IJOP). Such clues could include someone having an unexpected visitor or receiving an overseas phone call, and would prompt inspection visits modelled on neighborly interactions.

Instruction manuals cited by ASPI showed committee workers in the city of Kashgar were advised to "show warmth to their Uyghur 'relatives' and give kids candy" while observing the Uyghur targets.
"Xinjiang's community-based control mechanisms are part of a national push to enhance grassroots governance, which seeks to mobilize the masses to help stamp out dissent and instability and to increase the party's domination in the lowest reaches of society," the report said.
It detailed the case of an 18-year-old Uyghur man, Anayit Abliz, in Ürümqi, who was sentenced to three years in a re-education camp after he was caught using a filesharing app that is used widely in China to share movies, music and other censored content. "While he was detained, officials from the neighborhood committee visited his family members six times in a single week, scrutinizing the family's behaviors and observing whether they were emotionally stable," the report said.
The thinktank said the IJOP was managed by the political and legal affairs commission (PLAC). The PLAC, which the Chinese president, Xi Jinping, has called the party's "knife handle", is China's overseer of the national law and order system reporting directly to the CCP's central committee. The report found it wielded vastly expanded operational and budgetary control in Xinjiang, an expansion seen before in mass political campaigns.
"Xinjiang's bureaucratic inner workings in the last seven years fit a wider pattern of authoritarian rule in China," wrote the report's lead author, Vicky Xiuzhong Xu, saying some tactics used in the campaign were conceived elsewhere, while others used in Xinjiang were being replicated in other regions including Hong Kong.
ASPI also collected basic information of more than 440 principal and deputy county party secretaries in the Chinese region since 2014, unmasking the individual officials implementing the CCP's crackdown, including at least two who had been educated at Harvard as visiting fellows.
The report said the vast majority of county party secretaries - the most senior local officials - over the last seven years were of Han ethnicity. It said not a single Uyghur could be identified among secretaries in September, but they often served as a "ceremonial" second-in-command figure. ASPI said its findings showed the CCP promise of "ethnic self-rule" for the nominally autonomous region were a "fig leaf".
The report also alleged that, in addition to mass internment and coercive labor assignments, residents in China's far-west Xinjiang region were also compelled to participate in Mao-era mass political campaigns.
Responding to the report, China's embassy in London denied the allegations and accused the ASPI of being an "anti-China rumor-maker". It claimed its re-education centers were vocational training schools operating as part of its anti-terrorism efforts "no different from the desistance and disengagement program (DDP) of the UK or the deradicalization centers in France."
The ASPI report - funded partly by the UK, Australian and US governments - adds to a growing body of evidence of Beijing's crackdown in Xinjiang. China's government has been accused by Human Rights Watch and legal groups of committing "crimes against humanity", while some western governments have formally declared the government to be conducting a "genocide". China has denied all these accusations.
The report said Xinjiang authorities expected "extreme and repressive practices of the 2017 re-education campaign to become the norm by the end of 2021, a stage the party state calls 'comprehensive stability'". A recent media report from Xinjiang by Associated Press revealed a reduction in visible means of control and repression, but "a continuing sense of fear" among the population and ongoing surveillance.