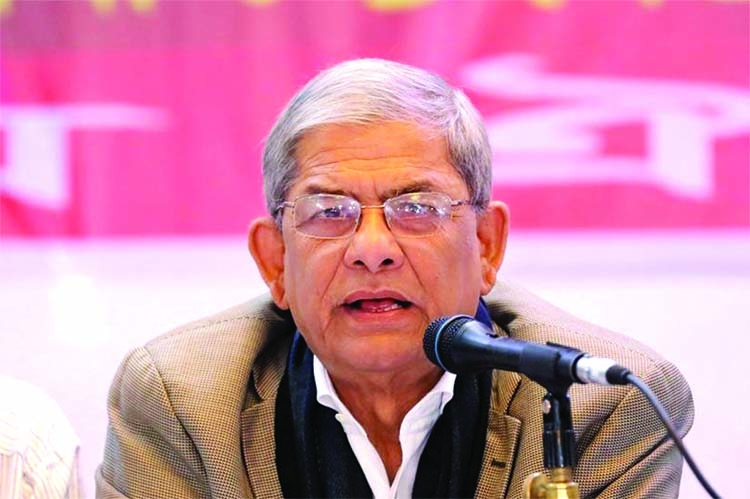 Bangladesh Nationalist Party's (BNP) Secretary General Mirza Fakhrul Islam Alamgir on Tuesday complained that the recent communal incidents in different areas of the country are part of Awami League's vicious stratagem to torment the opposition parties. Mirza Fakhrul Islam Alamgir further said that Awami League has created communal turbulence all over Bangladesh though the ruling party leaders are hypocritically talking about establishing peace.
"We think it's not possible to incite a riot and destroy communal harmony without the patronage of those in power," he said. Fakhrul alleged that the Awami League has started adopting various "evil tactics" to prolong its power.
"They're devising the evil designs to overcome the hurdle of the next election. These incidents are the proofs of such a plan." He made the remarks while exchanging greetings with members of the Hindu community on the occasion of Durga Puja at the party chairperson's Gulshan office.
Fakhrul claimed the Hindu community members know those who made the attacks on them, and their worship places do not belong to opposition parties, including BNP.
"We want to make it clear that the BNP always believes in the freedom of all religions and the party has already proved that," he added.
The BNP leader also criticized Awami League General Secretary Obaidul Quader for his remarks, blaming BNP soon after communal violence in Comilla, without any investigation. He said the BNP leaders and activists have been implicated in every case filed in connection with communal violence. "Hundreds of our leaders and activists have been made accused in those cases. Our 90 people have been arrested in Noakhali's Chauhamuni, and cases have been filed against those who can play a role during the election."
Fakhrul said the main motive behind these cases is to suppress BNP and using the cases as a weapon to weaken BNP ahead of the national election. Accusing the Awami league of doing the politics of deception, he said the ruling party is again trying to indulge in a game in the name of election by spreading the "politics of hatred".
He urged the Hindu community members to get united to ensure the fall of the current "monstrous regime" to establish a pro-people government. "This country belongs to all. We won't allow anyone to harm this country."
Around 150 members of the Hindu Community from different parts of the country joined the program.
BNP on Sunday formed two committees to investigate the attacks, alleging that the government was trying to protect the real offenders.
One of the committees is headed by Gayeshwar Chandra Roy, standing committee member of BNP, while another by Supreme Court Bar Association Secretary Barrister Ruhul Quddus Kajal.