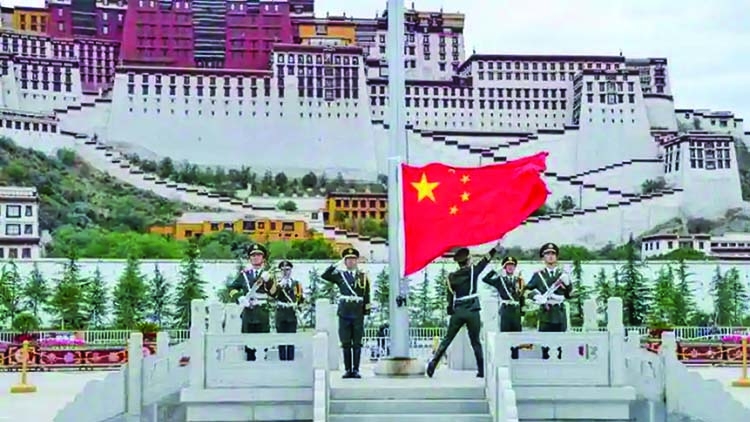 A rising Chinese politician sanctioned by western countries for alleged human rights violations in Xinjiang has been appointed as the Communist Party of China (CPC) chief of Tibet, Chinese official media reported on Tuesday. Wang Junzheng, 58, was the deputy secretary of the CPC committee of Xinjiang Uighur Autonomous Region (XUAR) and political commissar of the Xinjiang Production and Construction Corps, Hindustan Times reports.
Wang's appointment for the Tibet role will come under the focus of global rights groups and will be closely tracked by New Delhi in the backdrop of the ongoing border tension along the Line of Actual Control (LAC) in eastern Ladakh.
The status of current Communist Party secretary of the Tibet Autonomous Region (TAR), 65-year-old Wu Yingjie, who had assumed office in 2016, was not immediately clear though it is likely that he has retired.
Earlier this year, the US treasury department had sanctioned Wang, and Chen Mingguo, director of the Xinjiang Public Security Bureau, for alleged human rights abuses against the Muslim Uighur community.
The two were targeted for their role in Xinjiang under the US Global Magnitsky Human Rights Accountability Act, it said, adding that the move complemented actions taken by the EU, Britain and Canada.
"The United States is committed to using the full breadth of its financial powers to promote accountability for the serious human rights abuses occurring in Xinjiang," the US treasury department had said.
Reacting to the sanctions, Wang had told Chinese official media that the move was based on "lies and false information; are a gross slander and an affront to the reputation and dignity of the Chinese people; a flagrant interference in China's internal affairs; and a grave violation of China's sovereignty and security interests".
Wang's appointment for the Tibet role was announced by Zeng Yichun, vice-minister of the organization department of the CPC's Central Committee on Tuesday at a meeting of the leading party cadres of TAR in Lhasa.
Zeng said the decision was made after thorough consideration and careful study in light of the "overall situation and actual situation of the leadership of the region".
For the Tibet Autonomous Region's new party chief, Wang, the promotion is a critical one.
In 2019, Wang, former party chief of Changchun city, had taken over as the head of the political and legal affairs commission - the top political body responsible for law and order in the region - in XUAR; and in 2020, he was again promoted as deputy CPC secretary of the autonomous region.
Earlier this month, Yan Jinhai was appointed deputy chairperson and acting chairperson of TAR while former chairman, Qizhala, resigned, and is expected to take up a new role in Beijing.
The reshuffle is likely part of the build-up to the five-yearly CPC Congress to be held next autumn when China's President Xi Jinping is expected to start his third five-year term as party general secretary, the first Chinese leader to do so in decades.
In July, Xi became the first top Chinese leader to visit Tibet since 1990. During his visit, Xi stressed both social stability and the importance of border security for the mountainous region.