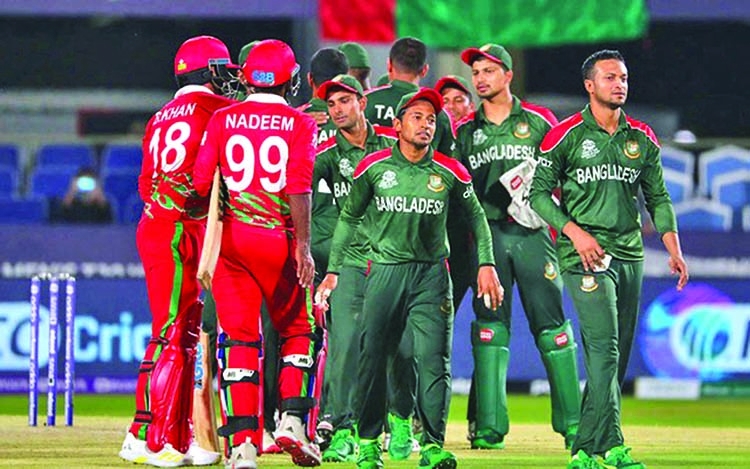 A solid all-round performance by Shakib Al Hasan and Mustafizur Rahman's four-wicket haul have fired Bangladesh to 26-run victory against Oman to keep hopes of reaching the next round alive in the T20 World Cup.
Oman ran neck and neck with the Tigers for most of the match at Al Amerat Cricket Ground in Muscat on Tuesday, but the Bangladesh bowlers staged a late comeback to restrict the hosts to 127 for 9 in a chase of 154 for a win, bdnews24 reports.
A confident Oman outfit, buoyed by a 10-wicket win over Papua New Guinea, were dealt an early blow in when Mustafizur trapped opener Aqib Ilyas leg before in the second over.
But the other opener, Jatinder Singh (40 off 33) kept the chase alive in partnership with Kashyap Prajapati (21 off 18).
The momentum began to swing in the Tigers' favor when Jatinder fell in the 13th over to Shakib's delivery, caught by Liton Das at deep square leg.
The chase eventually fizzled out under the pressure created by the Bangladesh bowlers as the hosts lost wickets in regular intervals.
Shakib bagged three wickets, while off-spinner Mahedi Hasan and seamer Mohammad Saifuddin chipped in with a wicket apiece to cap off economic spells.