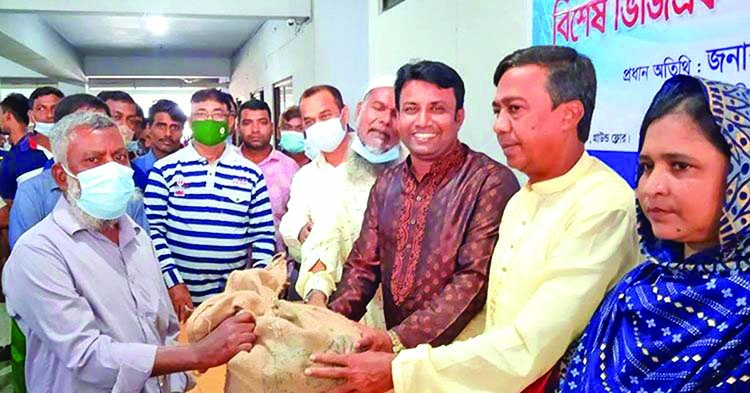 A total of 4,000 fishermen families were brought under special VGF program as they remained abstained from fishing Hilsa fish along the river Padma in different upazilas of the district during the current season.
Beneficiary families are getting 20 kilograms of rice during the 22-day mother hilsa fish conservation period from October 4 to October 25.
District Fisheries Officer Alok Kumar Shaha told BSS that the government has taken special initiative to make the drive of conserving mother hilsa fish successful. During the stipulated period, the fishermen families who remained abstained from hilsa fishing are being given special VGF food grains. Under the program, each of the 4,000 families along the bank of the river is getting 20 kilograms of rice in the district. Of them, 1,290 families in Godagari Upazila, 960 families in Paba Upazila, 425 families in Rajshahi City Corporation area, 570 families in Charghat Upazila and 755 families in Bagha Upazila are getting the support.  Alok Shaha said distribution of rice among the families has already been started. Rajshahi City Corporation (RCC) authority arranged a VGF rice distribution ceremony at the city bhaban premises on Tuesday. RCC Panel Mayor Shariful Islam accompanied by Secretary Moshiur Rahman and Senior Upazila Fisheries Officer Mozammel Haque distributed rice among the fishermen. Besides, drive is continuing in the Padma River to conserve hilsa fish in association with RAB, BGB and Police, he added. District Relief and Rehabilitation Officer Aminul Haque said 80 metric tons of rice was allocated for the purpose.  Respective union parishads prepared the list of the families in their areas and rice will be distributed with approval of the concerned UNOs, Aminul added. "We are very much hopeful about the successful distribution of the VGF rice on time," said Shariful Haque, ADC (General). Deputy Commissioner Abdul Jalil said instructions were given to the Upazila Nirbahi Officers (UNOs) along with Project Implementation Officers (PIOs) to distribute the rice to the beneficiaries.

"We are very much conscious about the quantity and quality of rice allocated for distribution," he added.