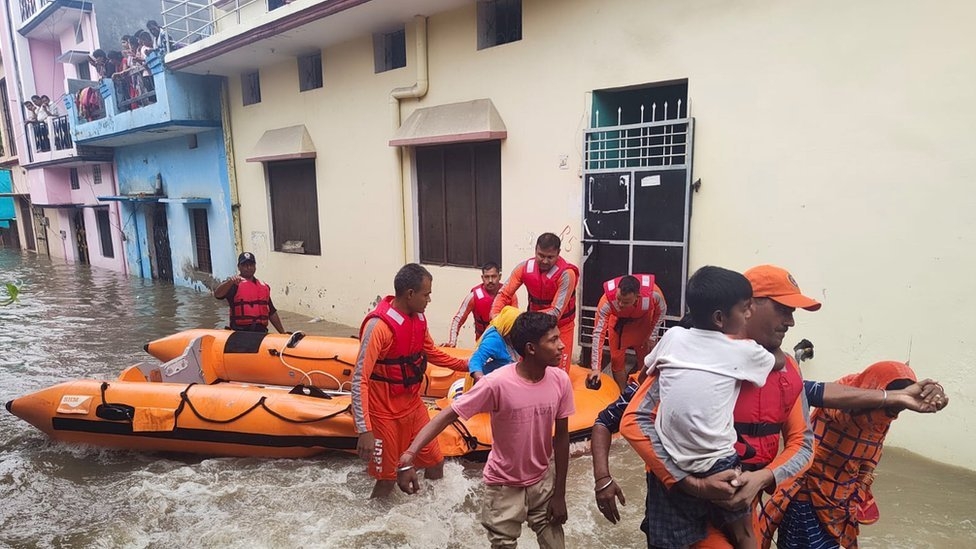 More than 100 people have died after heavy rainfall triggered flash floods in India's northern state of Uttarakhand and parts of Nepal.
Homes were submerged or crushed by rocks swept into them by landslides.
Some 50 people, including five from a single family, died in Uttarakhand and a similar number in Nepal, with dozens more missing in both nations.
Rains further south in India's Kerala state also triggered deadly floods, leaving another 39 dead there.
Six more bodies were recovered on Wednesday in Uttarakhand, taking the death toll in the Himalayan state, a popular tourist spot, to 52.
Schools have been closed and religious and tourist activities suspended in the state.
The Ganges burst its bank in Rishikesh and the popular Nainital region was severely affected.
Uttarakhand, which normally sees up to 30.5mm (1.2in) of rain for the whole of October, recorded 328mm in a 24-hour period this week.
But the Indian Meteorological Department says the rainfall is now easing.
Rainfall in Nepal may not be so quick to ease.
The worst-affected areas are Panchthar district in east Nepal, and Ilam and Doti in west Nepal.
Rescuers were struggling to reach 60 people stranded for two days in the village of Seti in west Nepal, Reuters reported.
Nepal's government is giving $1,700 (£1,220) to the families of each victim of the floods.
Uttarakhand Chief Minister Pushkar Singh Dhami announced a compensation of 400,000 rupees (£3,800; $5,300) for the families of those who have died and a further 190,000 rupees for those whose homes were destroyed.
Prime Minister Narendra Modi expressed his condolences on Twitter: "I am anguished by the loss of lives due to heavy rainfall in parts of Uttarakhand. May the injured recover soon."
While he attributed the heavy rains to the climate crisis, experts have also cited hydro-power projects in the higher reaches of the Himalayas, and excessive and often unchecked construction on steep slopes which cause damage to the region's fragile ecology.
Experts also say higher temperatures have meant lesser snow in the Himalayas - and this, coupled with heavy rains, is pushing large volumes of water downstream, triggering flash floods.
The southern coastal state of Kerala has also seen heavy rain since Friday.
Thousands of people have been moved to safety, with more than 1,600 homes destroyed or damaged.