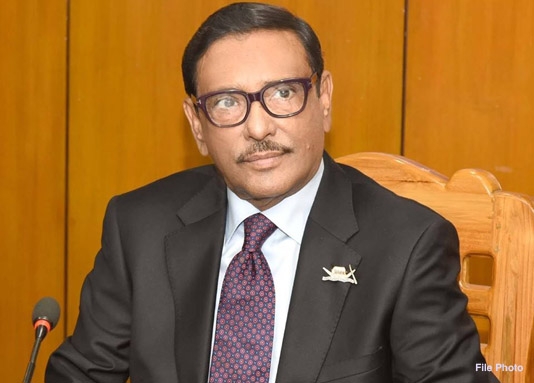 Awami League General Secretary and Road Transport and Bridges Minister Obaidul Quader today said BNP, failing to play role as a strong and responsible opposition party to fulfill people's expectations, is playing their 'old record' to hide inability.
"Sheikh Hasina's government wants a strong opposition party. Without going to people, BNP is now roaming around in virtual arena and media," he told a press conference at his official residence here.
Quader said the people want an opposition party that can read their mind and stand by them in their weal and woe and is capable of holding political programs, playing a responsible role and making constructive criticism of the government.
BNP leaders are reiterating their old allegations again and again, the AL general secretary said and urged the BNP to make comments in favor of the people stopping spreading rumors and misleading information.
Actually, BNP has now turned into an irresponsible envious party after forgetting their responsibility as an opposition party, he said.
Noting that now the BNP leaders aren't doing politics rather they are discharging official duty, he said the BNP leaders are now making comments and giving statements as per the order which have no relations with the interests of the country and the people.