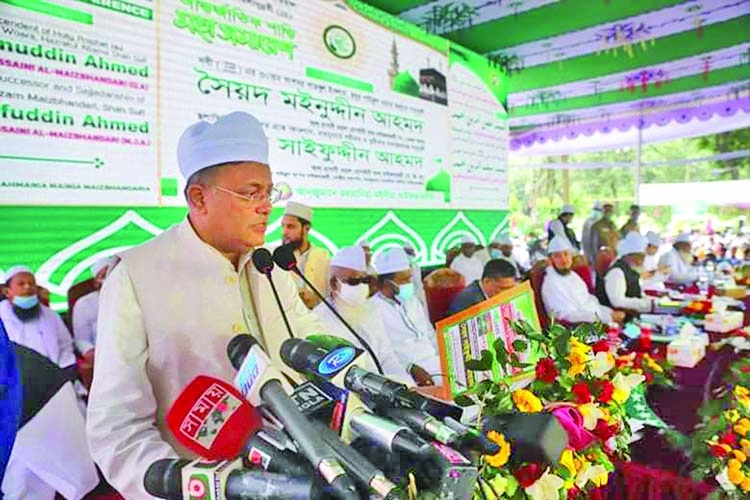 Information Minister Dr Hasan Mahmud has said that the procession on the occasion of Eid Miladunnabi (PBUH) has become an integral part of Islamic culture today. A true Muslim can never harm others and engage in terrorism and militancy. There will be no place for militants in this country of Auliya devotees and saints. There will be no benefit in spreading communal insanity. The people of this country are secular and liberal. We have to resist the communal evil with all our might.
He was speaking as the chief guest at a discussion meeting of the procession marking the birth and demise of Prophet Muhammad (pbuh), Holy Eid-e-Miladunnabi, organized by Maizbhandar Durbar Sharif in the capital on Wednesday morning. In the morning, Maizbhandar Durbar Sharif started in a procession from the Institution of Engineers in Dhaka, went around the main road and came to the Institution of Engineers and met in a peace rally. Participants in the procession, led by Anjumane Rahmania Mainia Maizbhandaria, carried flags, national flags and various placard-festoons emblazoned on the streets of the slow-singing on capital. Hazrat Shahsufi Sayyid Saifuddin Ahmad Al-Hasani (Majia), President of the Parliament of World Sufis, presided over the Peace Conference at the Institution of Engineers.
During the discussion, the Information Minister said that the government has declared 12th of Rabiul Awal as a public holiday. The essence of Islam is to increase friendship between people. Those who hold this essence never attack anyone else in the name of Islam. Today many people deviate from the roots of Islam and misinterprets Islam. People lead young people astray. Islam has been established in this town in love through Oli Auliyas. Those who speak out against them, incite violence, attack other religions; they are the instigators of sedition. Muslims and Hindus have fought together for the independence of our country. This country belongs to everyone. Today we have to crack down on those who are spreading confusion, spreading sedition against the holy religion of Islam. We have to stay together without discriminating among ourselves, without spreading discord among ourselves.