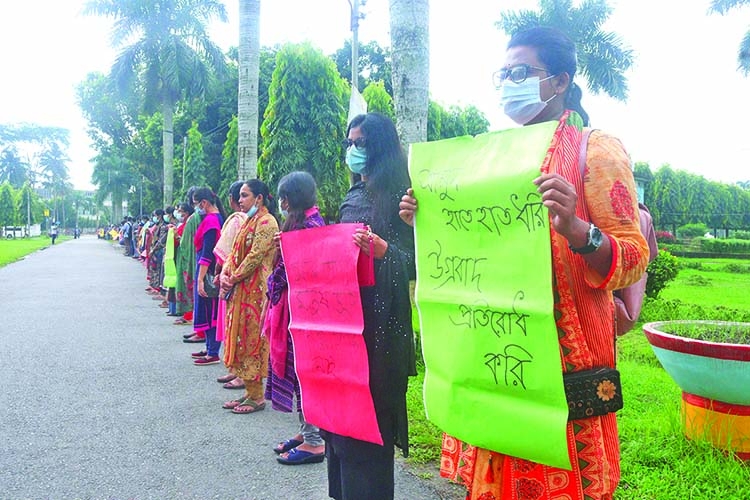 The Sanatan Sangha of Bangladesh Agricultural University (BAU) has organized a human chain in protest of the shameful incidents during Durga Puja festival and the subsequent communal attacks on the Hindu communities across the country. The human chain was held in front of Zainul Abedin auditorium at 10am on Thursday.
At that time, speakers said that during the recent Durga Puja, the main religious festival of the followers of Sanatan religion, communal extremist groups vandalized the puja mandaps and temples on October 13 in Cumilla, Noakhali, Chandpur, Feni and later Pirganj in Rangpur. A group of evil forces has been active in the country to destabilize the country by destroying communal harmony. They said, "In its continuation, they have carried out brutal oppression and persecution on innocent followers of Sanatan religion and vandalized temples and idols in different parts of the country, arson, and looted houses of Hindus. Many victims have lost everything in these incidents. But so far there has been no proper investigation and trial over these heinous incidents."
They also said that the people of Sanatan religion and common people in the country are very scared and worried after these incidents. That is why we are protesting and condemning all these nasty incidents from Sanatan Sangha of BAU. "We urged the present government to strengthen the security of all monasteries, temples, and followers of Hinduism in Bangladesh and to create a safe environment for them to practice their religion, including exemplary punishment for those involved in these incidents without delay. BAU Sanatan Sangha acting President Dr Lavlu Majumdar, BAU Teachers Association General Secretary Prof Dr Subash Chandra Das, Professor of Pathology Dr AS Mahfuzul Bari, University Student Adviser Prof Dr AKM Zakir Hossain, Associate Student Adviser Prof Dr Md Azharul Islam, University Proctor Prof Muhammad Mohir Uddin, Director of the International Desk, Prof Dr Md Mahfuzul Haque, Professor of Biochemistry.