Around 8,500 families marooned in Lalmonirhat 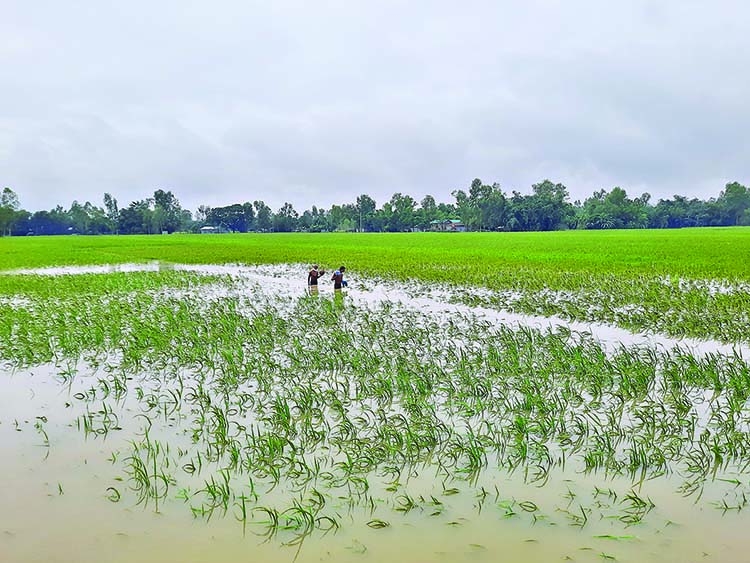 Photo shows the croplands goes under water due to heavy flooding of Teesta. The photo was taken at Bairati village under Tushbhander union in Kaliganj upazila of the district. -Badlul Alam Zadu.
The water level of the Teesta River is flowing over the danger level at Dali point of Teesta Barrage in Hatibandha on Thursday morning.
The water level has risen 70 to 80 centimeters above the danger level, said Mizanur Rahman, Executive Engineer of Lalmonirhat water development board.
Earlier at 2am while the water level of the river basing flowing over 80 centimeters above the danger level. Thousands of acres of paddy fields near the low lying areas of riverbank have gone under the water. The nearest concrete roads have also been damaged. Meanwhile, a large number of areas have been flooded due to water flowing over the danger level. Deputy commissioner Abu Jafar said, "The water lavel  of Teesta river is flowing over the danger level . As a result around 8,500 families in Patgram, Hatibandha, Kaliganj Aditmari and Lalmonirhat sadar upazila low lands areas have been marooned. Some 60 metric tonnes of rice and Tk 5 lakh have already been allocated for the flood-hit families of these areas as part of emergency relief assistance, the deputy commissioner added.
--- Badlul Alam Zadu in Lalmonirhat