Manikganj DC takes class at a school in Saturia 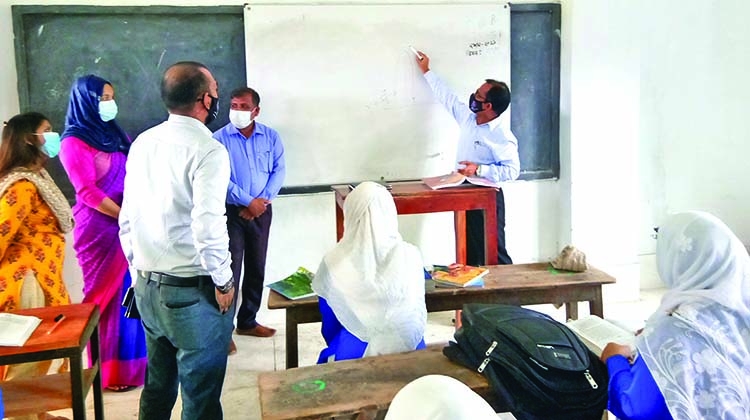 Manikganj Deputy Commissioner Muhammad Abdul Latif has taken class and captivated the students with his classes during his sudden visit to Horgoj Shahid Smrity High School in Saturia upazila on Thursday. The deputy commissioner paid a surprise visit to the school and without going to the offices; he first entered into the 10th physics class and took the class, which delighted the students.
Talking to our reporter, some students expressed with joy that, when DC Muhammad Abdul Latif entered the classroom, they first did not recognize him. They thought that he may be a new physics teacher of the school.
Saturia Upazila Nirbahi Officer (UNO) Sharmin Ara, Upazila Assistant Commissioner (Land) Rezoana Kabir, the school's  Head Master Mohammad Bazlur Rahman, Assistant teacher Shirin Akter, Bangladesh Journalist Association Saturia unit Organizing Secretary Engineer Muhammad Lutfur Rahman were present on the occasion.
While speaking the class, DC Muhammad Abdul Latif said, "The students of current generation should have practical knowledge about our liberation war and Bangabandhu." He advised the headmaster of the school to teach the students such ideas out of the curriculum. Earlier, he visited the Hargaz Union Parishad and Hargaz Land office.
--- Md Lutfor Rahman in Manikganj