‘Evidence on the effectiveness of vaping is incontrovertible’ 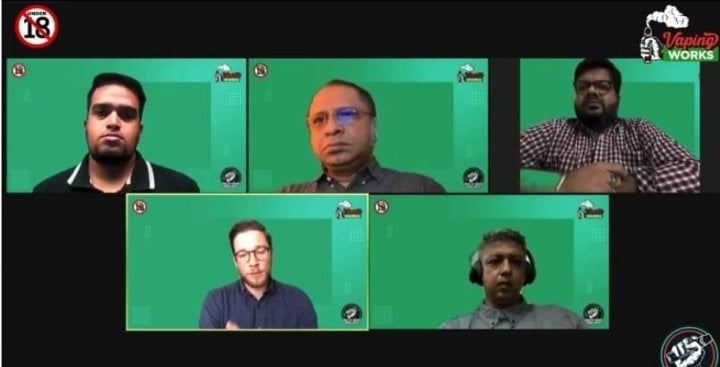 Speakers at a webinar on vaping on Thursday said that the evidence on the efficacy of harm reduction products like vapesis incontrovertible.

Organized by Bangladesh-based the Voices of Vapers, the webinar was based around the findings of a recently released white paper containing case studies on vaping in four countries.

The speakers discussed the findings of the paper and answered questions from a group of audiences who participated at the live session.

Michael Landl said that the progressive countries are implementing vaping regulations. If Bangladesh implements the regulation for vaping, it could be 6 million people who could switch to vaping than smoking cigarettes as per our calculation.

Vapes are at least 95% safer than the traditional combustible tobacco, according to the Public Health England. It’s not the nicotine that kills people, but it’s the tar from smoking, the speakers said while replying questions.

They said that vapes are 5 to 7 times more effective to quit tobacco than other nicotine replacement therapies like patches or nicotine gums.  Schumann said that vaping is 95 percent safer as per the information of the Public Health England. Economically it is also convenient and lower than buying cigarettes.  Vaping is also economically convenient, as the costing is lower than buying cigarettes every day, added the speakers at the session.

They also claimed that 7 million deaths worldwide from cigarettes smoking can be stopped through vaping without any cost to the taxpayer.  Dr Rajib said that the anti-vapors do not have the right ideas about the benefits of vaping. Propaganda says vaping is bad and more dangerous than smoking.

If somebody becomes a vapor, he cannot tolerate the smell of cigarette smoke.  Smoking rate in the UK – where the government embraced vaping as a quit smoking aid –dropped by 25% since 2012 to 2020. By contrast in the European Union — where vaping has faced hostility — smoking decreased by 1% point between 2014 to 2020, the speakers told.

During the online event, Mr Shahriar Arifin said that he gained stamina after switching to e-cigarettes, whereas he felt unwell when you smoked traditional cigarettes.

The case studies indicate that there is clear and comprehensive evidence indicating electronic cigarettes are “95 percent safer” than combustible tobacco products, and are “twice as effective as traditional nicotine replacement therapies,” the publishers of the papers said.

“Countries that embrace vaping, such as France, the United Kingdom, New Zealand, and Canada have witnessed a decrease in smoking rates that is twice as fast as the global average,” the paper noted.