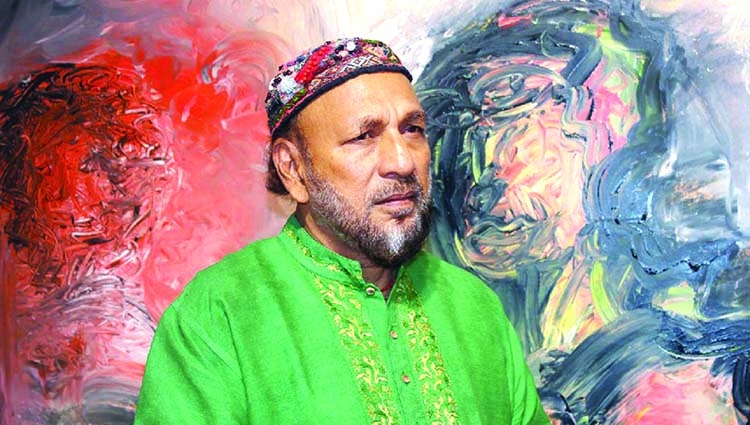 Gallery Cosmos on Monday paid its heartfelt tribute to Ekushey Padak-winning internationally acclaimed painter and printmaker artist Kalidas Karmakar with daylong programmes.
The programmes were organized at Gallery Cosmos and Cosmos Atelier71 at the Cosmos Centre, Malibagh in the capital, the UNB reports.
Kalidas Karmakar, acclaimed for his significant contributions to the Bangladeshi art sphere through his majestic and fascinating artworks, shocked the art world with his sudden demise on October 18, 2019 at the age of 73.
Distinguished artists and admirers of Kalidas Karmakar, a lifelong friend of Gallery Cosmos and Cosmos Atelier71, joined the daylong event.
They took part in discussions on the life and works of the great artist, created collaborative painting, observed the performance art by little artist Borisho Dhara, in remembrance of Kalidas, fondly addressed by everyone as "Kali Da".
Deputy Managing Director of the Cosmos Group Masud Jamil Khan, Director of Bangladesh Garment Manufacturers and Exporters Association (BGMEA) Dr Rubana Huq, former ambassador and diplomat Tofail K. Haider joined the event.
Renowned artists Hamiduzzaman Khan, Biren Shome, Ekushey Padak-winning Bangladeshi art maestro Dr Farida Zaman, eminent photojournalist Nasir Ali Mamun, indigenous artist Kanak Chanpa Chakma, Assistant Professor of Dhaka University's Drawing and Painting Department, Faculty of Fine Arts Bishwajit Goswami and Kalidas' eldest daughter Dr Konka Karmakar were, among others, present.
In remembrance of the late artist, Masud Jamil Khan said, "Kalidas Karmakar had always been a family member, a guardian angel for our Gallery Cosmos and Cosmos Atelier71. We deeply miss his presence here since his untimely departure; nonetheless he is always with us spiritually and we're proud of commemorating his legacy."
Echoing the same, Rubana Huq said, "Kalidas Karmakar was not just an artist; he was a friend, a mentor, an immensely creative and enlightening, vibrant soul. The English meaning of his name resonates with 'ink' - and through the inks and colours of his artworks, he'll forever live among us."
Ambassador Tofail K. Haider said, "Kalidas Karmakar had always been a lively soul, and together we shared many fond memories home and abroad. His sudden departure had deeply impacted me; that being said, he is always among us spiritually."
"He (Kalidas) was one of the most creative and flamboyant artists of Bangladesh, who was the living embodiment of freedom and free spirit," said Biren Shome.
Marking the occasion, Gallery Cosmos and the family of the legendary artist jointly announced that from now on, two young and promising artists will be awarded the 'Kali Artist Residency Grant' every year worth Tk 2,00,000 and access to practice at the Cosmos Atelier71 for three months, along with other artistic facilities.
Details regarding the grant can be found on Gallery Cosmos Facebook page and the deadline for the Kali Artist Residency Grant 2021 is October 30, 2021.
Kalidas Karmakar was awarded the Shilpakala Padak in 2016 and the Ekushey Padak in 2018 for his contributions to fine arts. His diverse artworks featuring found objects, handmade paper, and oil on canvas prints have been widely exhibited throughout South Asia, the Middle East, Europe, and the United States.
The artist's very first solo art exhibition was held at Bangladesh Shilpakala Academy on August 7, 1976.
He won the Polish Government Scholarship in Graphic Art at the Warsaw Academy of Fine Art, Warsaw University; French Government Superior Scholarship in Fine Arts, for research in multicolour etching at Atelier-17, in Paris; Japan Foundation Fellowship on Japanese Woodblock Printing at Tokyo National University of Fine Arts and Music; ICCR Special Scholarship for research in Contemporary Modern Sculpture, West Bengal Lalit Kala Academy Studio; and Asian Cultural Council New York, Fellowship with Artist Residency program in the US.
In 2006, he had received an ACC Fellowship to participate in a residency at the PointB Worklodge in Brooklyn, New York.
Major works by the artist have been collected by Kihak Sung, Youngone Corporation, Korea and Bangladesh; Hiroshi Toda; Takeo Yamaki; Takashi Kobayashi; Abul Khair, chairman of Bengal Foundation; Ambassador Paulo Da Costa Franco, Gallery Cosmos, and many other private collectors, at home and abroad