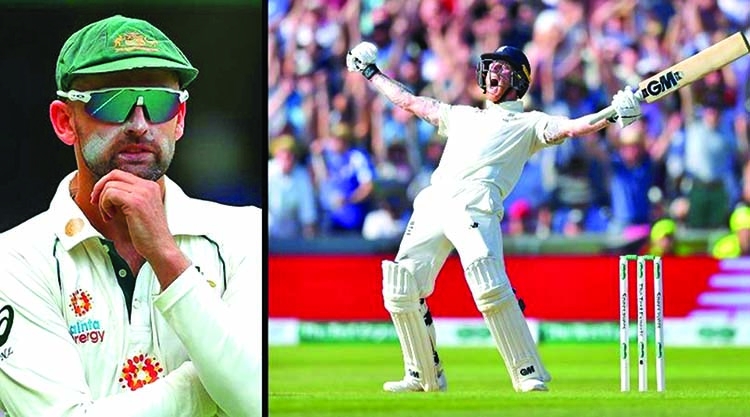 Australia spinner Nathan Lyon expects England all-rounder Ben Stokes to play some part in the 2021-22 Ashes series. Stokes, 30, was not named in England's squad as he is recovering from surgery on an index finger having taken an indefinite break from cricket in July to protect his mental health.
But he has posted videos of himself training and says he is "pain free". "I'm expecting him to come. I hope he is. You want to play against the best players in the world," said Lyon.
"Stokesy is the best all-rounder in the world. He's an X-factor, a game changer, and you want to play against these sort of players." The first Ashes Test is scheduled for 8 December in Brisbane. Stokes had surgery on his finger in April and had a second operation to remove two screws and scar tissue in October. The England and Wales Cricket Board (ECB) said Stokes would have intense rehabilitation but gave no timescale for his return from the injury or from his break for mental health reasons.
However, the prospect of Stokes returning has heightened following the player posting videos on social media of him batting in the nets. "My progress is that I am finally pain free and can hold my bat properly when batting," he said.
He added that he had "so much more confidence now, and I'm only two weeks on from my second surgery". Meanwhile, Australia top-order batter Will Pucovski is set to return to action for Victoria in a Sheffield Shield game starting on 5 November.
Pucovski experienced concussion symptoms for the 10th time after recently being hit while training. "He looks pretty good, so he's targeting the second Shield game," said Victoria coach Chris Rogers. "He's a pretty resilient guy now - if you go through [this] many setbacks, you have to have something about you."
--BBC