'Every game we're playing, gets us into more confidence' 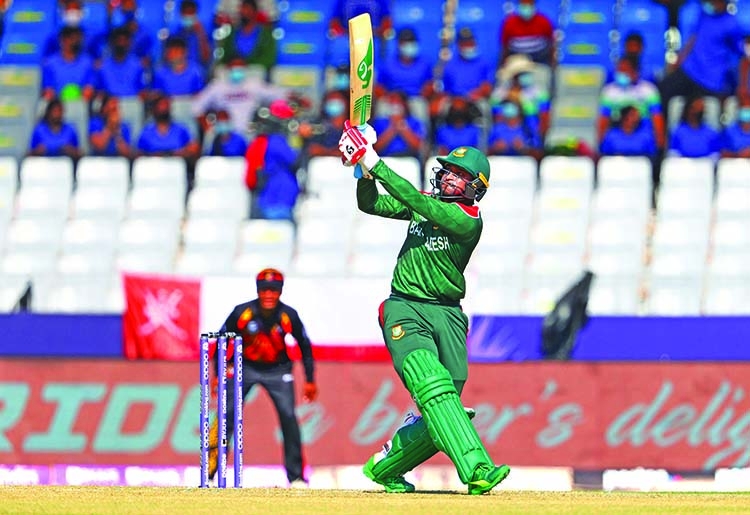 Bangladesh's Shakib Al Hasan plays a shot against Papua New Guinea in Al Amarat, Oman on Thursday. -ICC
Country's ace all-rounder Shakib Al Hasan insisted that Bangladesh are gradually getting into the groove after the shocking six-run defeat to Scotland in the first match of Twenty20 World Cup.
He said that the team is getting better day by day, which was demonstrated by their performance in the last two matches against Oman and Papua New Guinea (PNG). In those two matches, Bangladesh showed the improvement, required to take them in the next level. They beat Oman by 26 runs and even though, there was still some complain about their performance, Bangladesh put a near perfect performance in their match against PNG before crushing them by 84 runs. Shakib led the way, alongside skipper Mahmudullah Riyad as Bangladesh put on a hefty 181-7, their highest total in T20 World Cup before bowling PNG out for only 97 runs in 19.3 overs. The crushing victory confirmed Bangladesh's Super 12. Bangladesh now could be the group champions if Oman can beat Scotland in the next match.
"Every game we're playing gets us into more confidence. Obviously the first game was a setback but in the T20 format the team that is better on the day wins," Shakib told the media at a post-match press conference on Thursday. "But now the pressure is off and we can play expressively. It's not an easy format to get back into form, but luckily I'm getting more chance to bat up the order," he added. Apart from contributing 37 ball-46 in batting, Shakib finished with 4-9 that helped him earn consecutive second man of the match award. By taking those four wickets, he also equaled Shahid Afridi as the highest wicket-taker in the T20 World Cup. One more wicket will help him go past Afridi as the highest wicket-taker. In three matches so far in this World Cup, he took nine wickets. Shakib said that the long cricket season made him tired but he hoped that he can pull this tournament off.
"A little tired, I've been playing non-stop cricket for the last five-six months, it's been a long season for me. But hopefully I can pull this tournament off," he added.