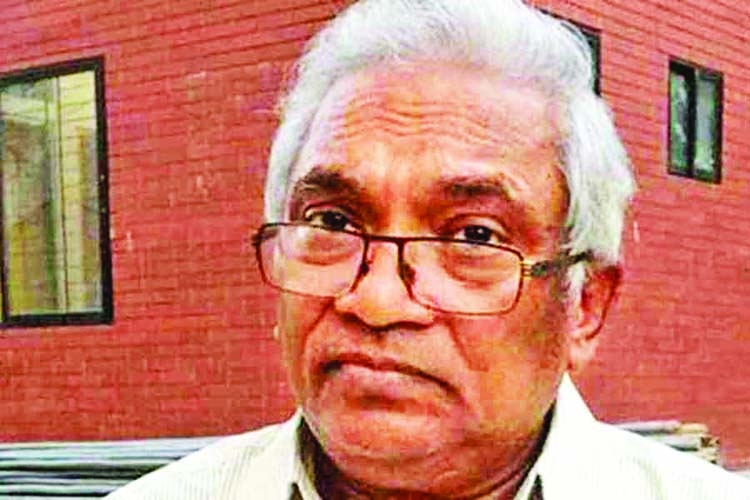 Rana Dasgupta, General Secretary of Bangladesh Hindu, Buddhist, Christians Unity Council has said that just blaming a vagabond called Iqbal Hossain for putting Holy Quran inside a puja venue of Cumilla is not enough. Rather the backstage planners who got it done should be identified and prosecuted, Rana Dasgupta further said.
Rana Dasgupta made these remarks on Thursday in Chittagong while speaking to journalists.
A man named Iqbal Hossain, 35, son of Nur Ahmed Alam from Sujanagar area of the city, had kept the Holy Quran at Nanua Dighir Par puja mandap in Cumilla on October 13. Police identified Iqbal's involvement after analyzing the video footage of surveillance cameras at the puja venue, Cumilla Superintendent of Police (SP) Farooq Ahmed confirmed on Wednesday. But he could not be arrested as of Wednesday.
Police say Iqbal Hossain is a drifter. It is still unknown whether he has any involvement with any political parties. In the CCTV footage, it was seen that Iqbal took the Quran from a mosque and walked to the Puja venue. He was later seen walking away with the Hindu God Hanuman's club in his hand. Police filed four cases over the Cumilla incident and arrested 41 people till now. Of them, four were Iqbal's associates.
Amena Begum, Iqbal's mother, claimed that Iqbal was a drug addict and used to torture his family members in various ways. He loved to stay at different shrines across the country, she added. Amena claimed Iqbal had some psychological issues for the last 10 years as he had been stabbed in the stomach by some neighbors.
His younger brother Raihan said he had been helping the police since Friday to find Iqbal. Iqbal's family stated that if Iqbal was really guilty, then he should be punished. Raihan also said that Iqbal might have been provoked by someone or some groups.
Cumilla Ward 17 Councillor Syed Sohel said he believed someone took advantage of Iqbal's psychological problems to use him.
Earlier, Home Minister Asaduzzaman Khan Kamal said authorities had identified the person behind the Cumilla incident.
"I hope the prime suspect in the Cumilla incident will be arrested soon… he has been changing locations frequently to avoid getting caught. We'll be able to unfold the Comilla incident once he's arrested," he said.
Police arrested another person Md Foyez Ahmed, 41, on October 13 and got him on remand to interrogate him. He posted a Facebook live from the Puja venue on that day that went viral.
Based on allegations of defamation of the Holy Quran at a puja mandap, violence broke out at several districts in Bangladesh during the Durga Puja celebrations last week.
At least seven people were killed over the incident in different parts of the country. Police arrested over 450 people and filed 72 cases till now over the communal violence.
Hundreds of Hindus lost their homes, businesses while many temples and puja venues were vandalized following the Cumilla incident.