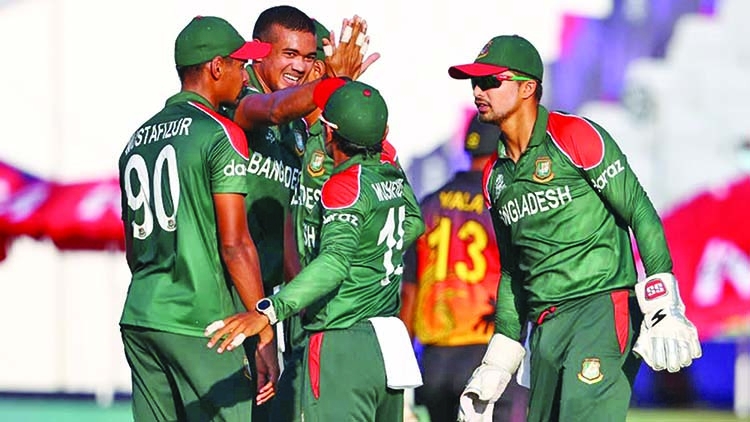 Bangladesh's quick Taskin Ahmed celebrates with teammates after taking a wicket against Papua New Guinea in Al Amarat, Oman on Thursday. -Getty
Bangladesh have beaten Papua New Guinea by 84 runs in the ICC Men's T20 World Cup to reach the Super12 round. The Tigers won the toss on Thursday and chose to bat, setting a target of 182 for the minnows, bdnews24 reports.
Skipper Mahmudullah played a captain's knock, scoring 50 from 28 balls, while Shakib racked up 46 in 37. Mohammad Saifuddin ended the Tigers' innings with a bang, scoring 17 from the last two balls thanks to a no-ball. Papua New Guinea was unable to offer much resistance to Bangladesh's bowling attack, but wicketkeeper Kiplin Doriga made an admirable effort to keep the Tigers at bay, scoring an unbeaten 46 from 34 deliveries. Shakib was also the pick of Bangladesh's bowlers, picking up four wickets for only nine runs.
Taskin Ahmed and Mohammad Saifuddin also picked up two scalps each.