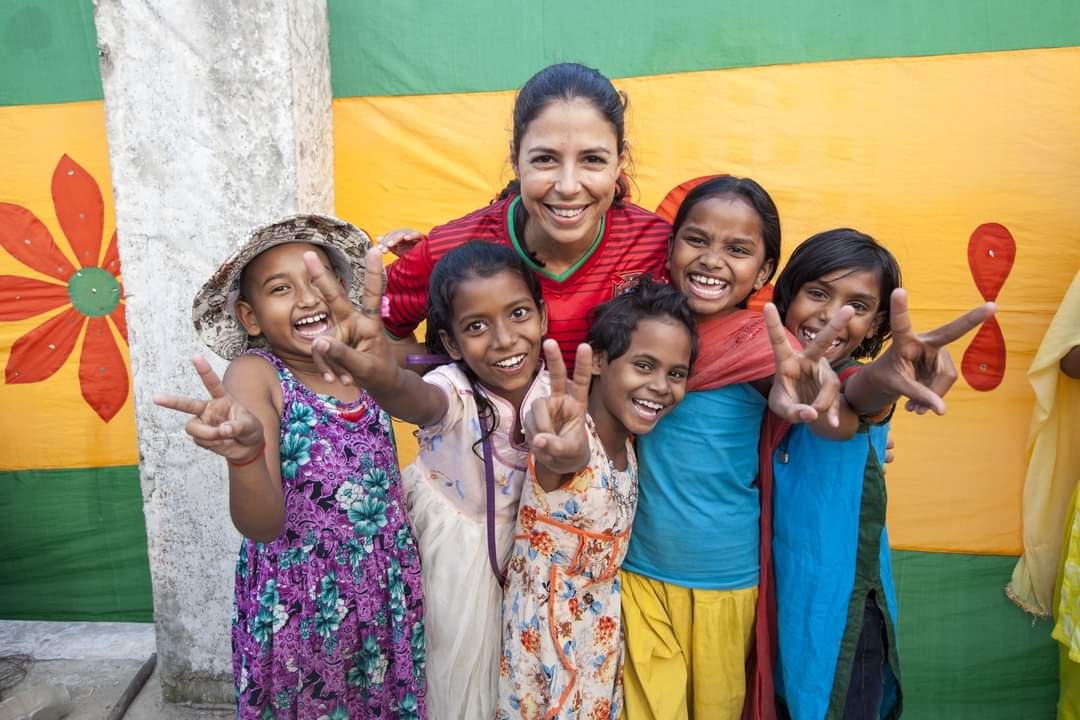 Maria Conceicao I call this the comeback challenge because for me it is really a journey that started from zero, from a place, 1 year ago, where I felt that I had nothing and could achieve nothing; from a position where it

felt that most of my strengths had been taken away from me, so that I had nothing to provide for myself, or for others who depend on me so much. My aim is to complete the full ironman in Cascais, on 23 October 2021, followed by the Half Ironman in Cascais

the next day on the 24 October. These are both official Ironman events. The full ironman consists of a 3.8km swim, followed by a 180km cycle, followed by a 42.2km run (a full marathon run). The half ironman is the same activity but half the distance for each.

Almost 1 year ago I had a complicated knee surgery. My last mountain climb attempt on Mount Denali in 2018 caused a serious knee injury. Severe impact from falling on ice, caused damage to my patella, the cartilages and the femur bone; injuries which deteriorated

rapidly in the two years following. I had no choice but to undergo surgery, I had to ignore my own stubbornness and listen to advice from others, to save my knee for the long-term. But for me it was still a hard decision, knowing that I would wake up unable

to walk with a long road ahead to recovery. Feeling that I had no choice, if I wanted to save my knee, I went ahead with the surgery on 7th November 2020. I was feeling positive about it. After surgery the pain was excruciating and I was almost bed ridden

and on crutches for many weeks to allow the surgery to take effect, it was worse than I imagined and my positivity from before the surgery quickly disappeared. The situation gradually destroyed my mental strength. It felt like it would be impossible to walk

again let alone do any athletic challenges. As the weeks passed, where I had to protect the knee at all costs, I could literally see the muscles deteriorating and I could feel myself losing physical strength in my legs. In my first physiotherapy sessions I

was useless, I could hardly move my leg at all. This all started to severely affect my mental strength, I started to feel that I would never be the same and never achieve any athletic goals. At several points the physiotherapy sessions started to feel worse

instead of better, there were flare ups as if my body had given up, like my leg decided that I would never get full movement again. I started seeing MCF drowning again just like Titanic. I decided around then that I had to set myself a challenge. Something

big enough that it was more than the average person would contemplate, so that I really had to commit to it, but also not so big that it could cause permanent damage. A weekend of ironman triathlons in Portugal was perfect, it’s extreme enough to even complete

one race, either, half ironman or full ironman and so to push myself to do both races on consecutive days was perfect to give me the boost I needed and prevent MCF from sinking. I committed to the goal. I knew that to even come close to completing both races,

the work I had to do to rehabilitate and get back enough strength and fitness was immense. I had to improve continuously every single day. There were many times where I broke down in tears thinking it was impossible, but I had to keep going, making some kind

of progress every day was essential, even if only a little bit. So now, the time is near, just a few days to the races and I’m feeling strong. I still cannot run, so I will have to walk the marathon part. The biggest challenges will be making the official

cut off times but also maintaining the strength and energy to complete what is potentially a 16 hour race on the first day and then to race again the following day with virtually no recovery time. I am still not back to full strength but I just have to pray

that I have built enough strength to complete the challenge. If I didn’t have this challenge, I probably would still be struggling to walk, so for me it has been an opportunity that has helped me forward. However it wouldn’t be possible at all without the

help of many amazing people such as Dr Ali Bajwa the amazing knee surgeon from the UK, Up and Running Clinic in Dubai for my rehabilitation especially Dr Ana, Coach Joao Arteche from BR Performance for strength and conditioning, Paulo at Swimsmooth Dubai,

Ben Barwick my virtual coach at full potential and Kcal Extra for nutrition. Not only did they provide the essential services – they also believed in me, which is the most important thing of all. This is why I continue to help the struggling families of Bangladesh,

for over 16 years now, more than a hundred families and over 600 children in total. Providing education and family support. We now have students at universities all over the world, with several who have now graduated or are studying for masters degrees. I

recently started a new project to resettle 5 single mother families and their 9 young daughters in Dubai, to find the mothers decent work so that they can support their daughters through school and university - if they stay in Bangladesh they will never have

these opportunities so will always need help - but this makes them independent and strong.