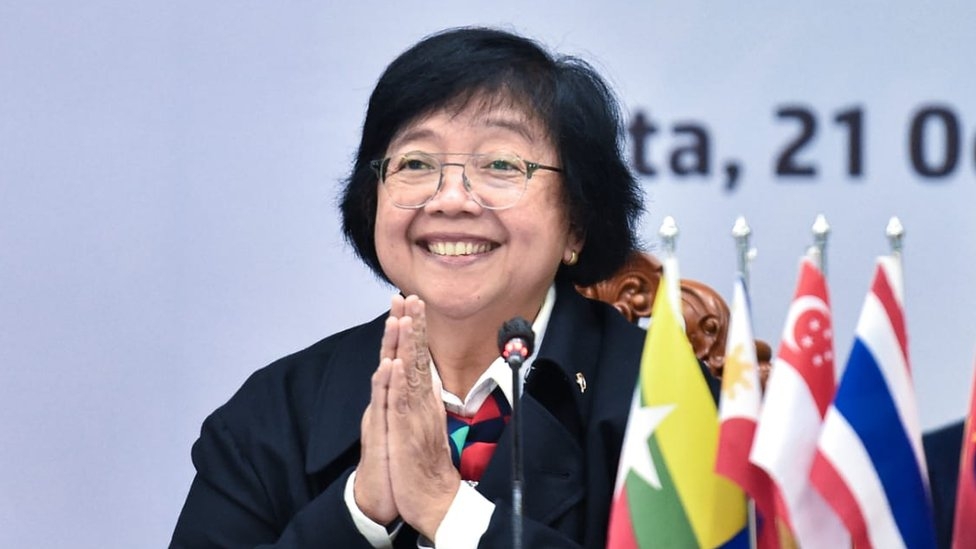 Indonesia has criticized the terms of a global deal to end deforestation by 2030, signalling that the country may not abide by it.
Environment Minister Siti Nurbaya Bakar said the authorities could not "promise what we can't do".
She said forcing Indonesia to commit to zero deforestation by 2030 was "clearly inappropriate and unfair".
Despite President Joko Widodo signing the forest deal, she said development remained Indonesia's top priority.
The deal, agreed between more than 100 world leaders, was announced on Monday at the COP26 climate summit in Glasgow. It was the event's first major announcement.
It promises to end and reverse deforestation by 2030, and includes almost £14bn ($19.2bn) of public and private funds.
In a Facebook post (in Indonesian), Ms Nurbaya argued that the country's vast natural resources must be used for the benefit of its people.
She cited the need to to cut down forests to make way for new roads.
"The massive development of President Jokowi's era must not stop in the name of carbon emissions or in the name of deforestation," she said, referring to Mr Widodo by his nickname.
"Indonesia's natural wealth, including forests, must be managed for its use according to sustainable principles, besides being fair," she said.
Experts welcomed the agreement, but they warned a previous deal in 2014 had "failed to slow deforestation at all" and said commitments needed to be delivered on.
Felling trees contributes to climate change because it depletes forests that absorb vast amounts of the warming gas CO2.
Meanwhile, Indonesia's Deputy Foreign Minister Mahendra Siregar said that describing the deal as a zero-deforestation pledge was "false and misleading".
Indonesia's vast forests are still shrinking, despite a marked slow down in the deforestation rate in recent years.
According to the Global Forest Watch monitoring website, in 2001 the country had nearly 94 million hectares of primary forest - defined as tropical forest that has not been completely cleared and regrown in recent history.
That area had decreased by at least 10% by 2020.