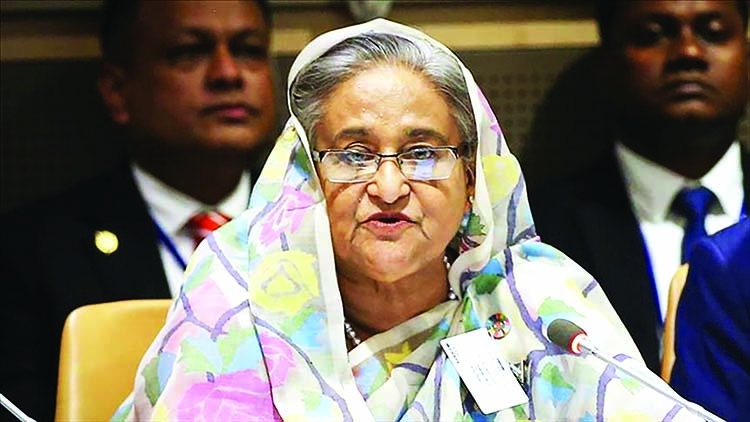 The people of Bangladesh were introduced with France through the history of Plassey War where Sinfray (Monsieur Sinfray), a French artillery officer who fought in the Battle of Plassey (1757) for Siraj Ud Daulah, Nawab of Bengal. Later the character Sinfray were became well-known to the people through Bengali movie Siraj Ud Daulah. France recognized Bangladesh on 14 February 1972 as 34th country. The Relations were furtherstrengthening in 1987 with the signing of the Cultural Cooperation Agreement. During Ershad Regime in the 1990, the then French President Francois Mitterrand visited the country as a first French President to visit Bangladesh. In 1999, Sheikh Hasina became the first Bangladeshi prime minister to visit France. Between 1999 and 2021, several ministerial level visits also took place between the countries.
Prime Minister Sheikh Hasina has visited France for the second time from last November 9 to 14. Through this visit Bangladesh wants to take the relationship to a new height. In this regard both Bangladesh and France have agreed to increase their socioeconomic and political cooperation. French is one of the development partners of Bangladesh. The country in one of the largest export destinations for ready-made garments (RMG).By 2020, bilateral trade was worth 2.76 billion euros. Bangladesh's export to France accounted for 2.52 billion euros of that, while French exports to Bangladesh were just $250 million.
On the other hand, the perception of the common people of Bangladesh about France is not positive at all. Although, Bangladesh does not have the bitter experience of French colonization which have many African countries. Most recently,French President Emmanuel Macron refused to ban cartoons depicting the Prophet Muhammad, calling Islam a crisis of world civilization. He has banned the hijab for Muslim girls in his country and closed many mosques. Along with Muslims of the world protested against it and thousands of people joined in a march in Dhaka against France and calling for a boycott of French products. However, Hasina's government didn't pay heed to their demands.
There is discussion among the political elites that the visit was to strengthen defense relations including others involvements. It is mentioned that Bangladesh and France have strong cooperation in the high-tech sector. Bangladesh's first ever satellite, Bangabandhu-1, was made by the French company Thales. Recently, the United States and the United Kingdom have signed an agreement to supply nuclear submarines and missiles to Australia. That's why Australia's major deal to buy submarines from France has been scrapped. So, the country may be trying to sell military equipment trying to some small buyers like Bangladesh as an attempt to minimize the loss.
In March 2020, French defense minister Florence Parly visited Dhaka and met with Sheikh Hasina to lobby for the purchase of their country's Rafale warplanes, a twin-jet fighter aircraft, and unmanned combat air vehicle. Right now, there are buyer crisis in the international market. At that time, Sheikh Hasina said that Bangladesh would be happy to see greater cooperation in the areas of defence with France.The governmentof Bangladesh is willing to develop Bangabandhu Satellite-II as the lifetime of the Bangabandhu Satellite-I, developed by a French company, is 15 years. The Analysts are trying to portray the visit as the follow up visit of French defense minister. However, the experience of Rafale is not at expected level. In India, opposition groups called for a boycott of the Rafale warplane after the government bought the Rafale fighter jet.
Not matter whatever the public sentiment in favor or disfavor the government is now attaching utmost importance to multilateral cooperation with France. Although it seems anti-French sentiment has been minimized in the course of time. On the other hand, to influence the public opinion the government of France will have to increase international influence. Moreover, the French presidential election is going to be held in the next April. The government of President Emmanuel Macron, which has been hit hard by the cancellation of the Australian agreement, will have to come up with some new arms deals to overcome the crisis. If Sheikh Hasina goes to Paris with that proposal, they will grab her and will increase to renew bilateral relations with the country. In this regard, USA may have influence to Bangladesh as it is trying to console France to come out from the loss of AUKUS pact.
But there is a saying that if USA is your friend, you need not enemy. We must not forget the practical truth. It is also believed that there is no last word in the politics. Observers believe that after the Summit for Democracy, US pressure on Bangladesh to hold fair elections and human rights will increase. It remains to be seen how Sheikh Hasina's government come out from that pressure.