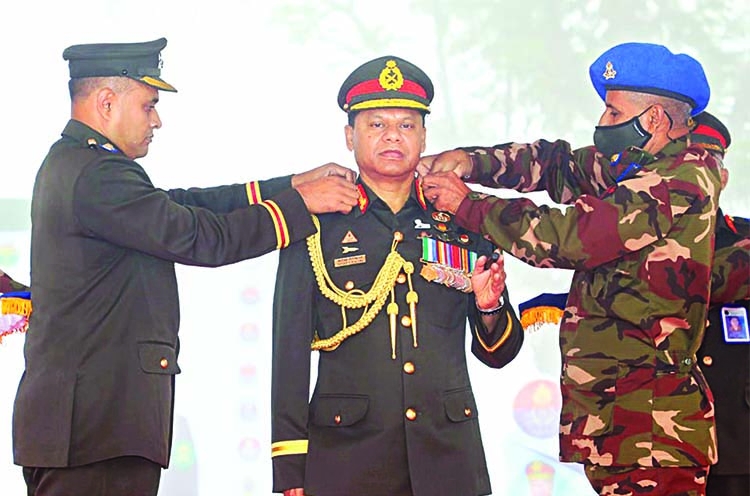 Badges of Rank of Colonel Commandant were put on Army Chief General SM Shafiuddin Ahmed by the senior most commanding officer and master warrant officer at a colorful ceremony in Qadirabad Cantonment in Natore on Wednesday. -ISPR
The Corps of Engineers on Wednesday got Bangladesh Army Chief General S M Shafiuddin Ahmed  as its new Colonel Commandant who pledged to further modernise the Sappers. He is the 8th chief to hold this position of honour.
Gen Ahmed thanked Prime Minister Sheikh Hasina for modernising the armed forces which in turn helped it to become the top troop contributing force in the United Nations Peacekeeping Operations Badges of Rank of Colonel Commandant were put on the Army Chief by the senior most commanding officer and master warrant officer at a colourful ceremony in Qadirabad Cantonment, the home of Sappers or the Corps of Engineers Centre.
The event coincided with Mujib Borsho and 50 years celebration of Bangladesh's Independence. Band played Joy Bangla Joy Bangla and Prothom Bangladesh Amar Shesh Bangladesh among few others recollecting the supreme sacrifices of men and women army personnel during the 1971 Independence War and while working for the nation in the post-independence period.
Gen Ahmed reviewed the parade on a jeep and took the salute of a march past led by Major Md Sifat Khan.
The Qadirabad Cantonment is named after Lt Col Mohammad Abdul Qadir, the senior most army officer martyred in 1971 and who was a member of the Corps of Engineers Explosives provided by him were used for blowing up bridges including Shobhapur Bridge delaying the entry of the Pakistan Army in the Southern parts of the country.
The parade ground was decorated with flags of various colours used by the army and set in a garden of marigold flowers.
Senior and officers of other ranks of the army from the area were present with their wives
The army chief said due to massive involvement of Corps of Engineers in different development activities, it has made the army more integrated with national development.
"The Engineers have been playing a very commendable role in the UN missions and I will do everything to further upgrade the corps."
Qadirabad Cantonment is the only cantonment which is named after the Martyred Valiant Freedom Fighter who is buried there.
Col. Qadir was re-buried with full state and military honours in 2011 after his elder son traced his grave following a long search. He was missing since arrest by the Pakistani army in Chottogram in 1971.