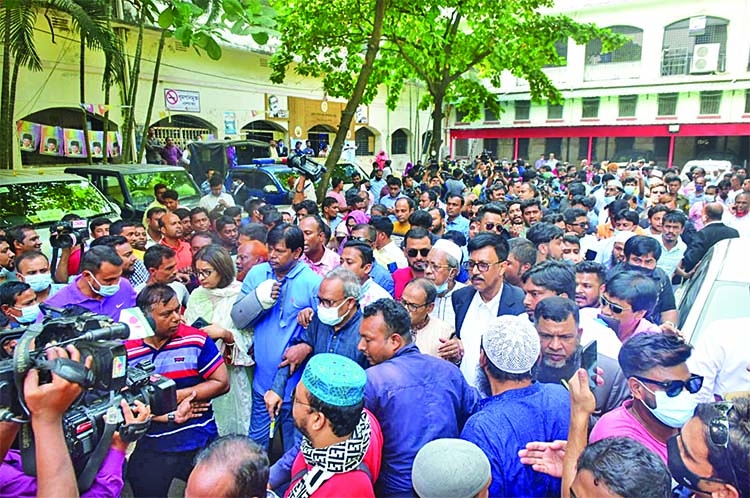 BNP submits a memorandum to the Dhaka deputy commissioner's office on Wednesday demanding release of party chairperson Khaleda Zia and for her advanced medical treatment abroad. -Mostafizur Rahman/AA
The BNP has dismissed speculation surrounding the condition of party chief Khaleda Zia, who is undergoing treatment at a hospital in Dhaka with various health issues. The party's Secretary General Mirza Fakhrul Islam Alamgir blamed "certain quarters with vested interests" for spreading "false information" about Khaleda during a media briefing on Wednesday, bdnews24 reports. "I told you yesterday that these rumors have no basis," he said. "Some rumors are still being spread. I think that certain quarters are spreading the rumors with malicious intent. You can directly call me to enquire about madam [Khaleda]," he told reporters.
Speculation about the health of Khaleda has been running rife on social media since Tuesday night. It has led leaders and activists from all over the country to call their acquaintances in Dhaka to inquire about the former prime minister.
One of the rumors is that the authorities have issued a 'red alert' across the country in light of the situation. Asked about it, Fakhrul said, "Where did you find the 'red alert'? Where? Has the government issued any notification? I didn't see it."
He said the BNP chairperson was "still in a very critical state". "The doctors are monitoring and treating her with their best efforts."
Khaleda's younger brother Shamim Eskander has recently submitted a petition, the fifth one by the family, to the government to allow the BNP chief to travel overseas for advanced treatment. But the government has said she must return to jail first to serve sentences in two corruption cases.

The 76-year-old was convicted and taken to jail three years ago. In April 2020, in the light of the Covid-19 pandemic, the government granted a request from her family for a conditional temporary release from jail on "humanitarian grounds".
She has since stayed at her Gulshan home under the care of her personal doctors and has had limited interaction with others.
She suffers from arthritis, diabetes and complications involving kidneys and lungs. She had been hospitalized with Covid-19 as well.
Fakhrul on Tuesday said the doctors recommended the US, the UK or Germany for her treatment. She is currently at the coronary care unit of Evercare Hospital.