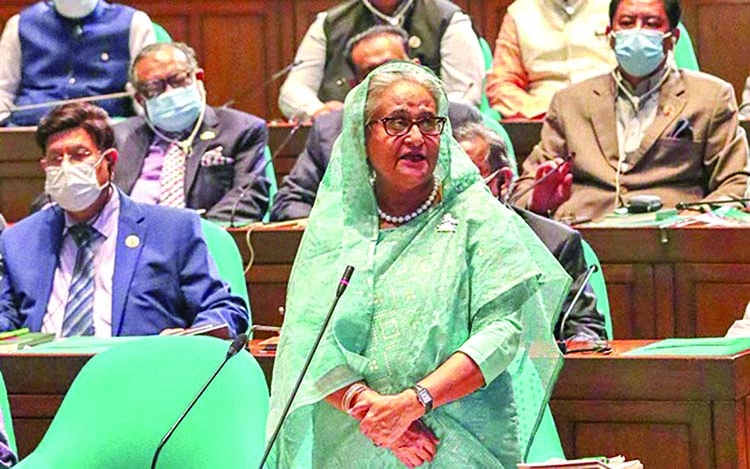 Prime Minister Sheikh Hasina has underscored the socio-economic progress made by Bangladesh in the last decade and reiterated her government's commitment to working in the interest of the people.
She made the remarks during a special session in parliament on Wednesday to mark the golden jubilee of Bangladesh's independence, bdnews24 reports. Earlier, President Abdul Hamid made a commemoration speech at the the national assembly before Hasina led discussions on a special resolution.
"We did not assume power with the sole objective of wielding it. Power means having the opportunity to serve the people, to have the opportunity to work for the people and to change the destiny of the people," she said.
"We have been able to reduce the poverty rate to 20 percent. If it wasn't for the coronavirus pandemic, it would have come down to 17 percent." Hasina lamented the economic slowdown caused by the pandemic and said, "Our economic growth surpassed 8 percent. But because of the pandemic, there was a global economic downturn so there was not a lot we could do on our own."
The government's policies have transformed Bangladesh into the "fastest-growing economy" in South Asia, according to the Awami League chief. She also highlighted the initiatives taken by her administration to tackle the pandemic and moved to assure that the country has an adequate vaccine stock.
"Ninety million doses of the Covid-19 vaccine have already been administered. Around 40 million people have received their second doses. There will be no shortage of vacancies.
"We are keeping our economy afloat by providing incentive packages. We are encouraging farmers by providing all kinds of subsidies so that our crop production can continue and we can avoid a food crisis."
"Despite hundreds of obstacles, Bangladesh is moving forward today. We have to go even further and I have prepared the framework for that."
--- Agency