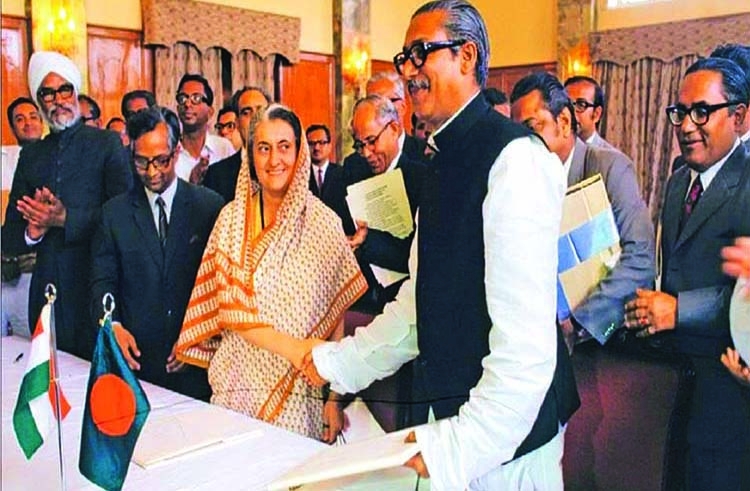 Former Indian Prime Minister Indira Gandhi with Bangabandhu Sheikh Mujibur Rahman. -Getty Images
The celebration of the birth centenary of Father of the Nation Bangabandhu Sheikh Mujibur Rahman and the independence golden jubilee of Bangladesh began from March 2021. Bangladesh became independent through the Liberation War of 1971 which continued for nine months. Three million martyrs laid down their lives for our independence and over two hundred thousand women lost their honour while the war was going on.
While recalling the Liberation War, we must admit the contribution of four national leaders who are Syed Nazrul Islam, Tajuddin Ahmad, Captain Mansur Ali and AHM Quamruzzaman. Syed Nazrul Islam, Tajuddin Ahmad, Captain Mansur Ali and AHM Quamruzzaman all played crucial roles in the Mujibnagar government-in-exile during the Liberation War of 1971.
Syed Nazrul Islam served as acting president, Tajuddin Ahmad as prime minister, Mansur Ali as finance minister, and AHM Quamruzzaman as home, relief and rehabilitation minister in the course of the war. Following liberation, they held significant positions in the government led by Bangabandhu Sheikh Mujibur Rahman.But there was no remarkable event to recall the great work done by the four national leaders while celebrating Mujib Borsho and the independence golden jubilee of Bangladesh.
We need to enlighten our young generation about the true history of our struggle for freedom. We also need to expand digital education more comprehensively. We should have been able to provide a tab to each schoolchild by 2021 but we could not do so. Even Dhaka University does not have a virtual campus. We will have to adopt latest technologies like block-chain technology, artificial intelligence, cloud computing in our education system to transform our youths into competent human resources.
Rabindranath Tagore wrote our national anthem while the slogan "Joy Bangla" was picked from a poem of Kazi Nazrul Islam.We will have to fight the ghosts of the anti-independence entities from our administrative and financial turfs. We also have to combat false propagations on social media which aim to tarnish the government's image.
If we fail to deliver the authentic history of 1971 to our youths, then there will be no patriotic zeal among our young boys and girls. We have in the meantime seen that some youths emblazoned Pakistan flag while the recent T20 cricket tournament between Bangladesh and Pakistan was going on in Dhaka.
They were seen holding Pakistan flags in their hands and cheering up the Pakistani players who are playing a T20 tournament against Bangladesh in Dhaka. It saddened the patriotic citizens to see these young Bangladeshis' love for Pakistan. These youths actually have no idea about Bangladesh's history. Particularly they do not uphold the spirit of 1971 or have no clear concept of the Liberation War. The Pakistan Army and their local collaborators killed three million people of East Pakistan (now Bangladesh) during the war of 1971.
It was a bloodbath through which  Bangladesh gained its independence. Unfortunate it sounds though, the education system of Bangladesh has failed to instill patriotism in the minds of youngsters. For this reason these young people have no love for their motherland. Rather they are showing love and support to Pakistan against whom Bangladesh had to fight a blood-spilling war for nine months to obtain freedom.
Pakistan at present is a radical country. Pakistan sheltered Osama Bin Laden. Pakistan sheltered a lot of Taliban leaders. So, supporting Pakistan in sports is same as saying "yes" to religious extremism. Radical groups are still a threat for Bangladesh. Communal gangs vandalized the houses and temples of Hindus in several parts of Bangladesh this year while Durga Puja was going on.
This pro-Pakistan attitude leads to an anti-Indian sentiment. Lots of people in Bangladesh expose hate speech against India on social media. These people do not know how much India helped Bangladesh during the Liberation War of 1971. Over ten million Bangladeshis took shelter in India during the war. Many Indian soldiers got killed while fighting for Bangladesh's independence.Even Indian political party Congress observed the golden jubilee celebrations of the Liberation War of 1971 in India.
We will have to illuminate our youths with the true knowledge of history. The history of the liberation of Bangladesh was distorted in various ways while anti-independence quarters were in state power in the past.People who support Pakistan have no knowledge on the true history of Bangladesh. It is an audacity and a vice to support Pakistan. Pakistan killed three million Bangladeshis during 1971. It is very painful that most of the Bangladeshi youths do not believe in the spirit of 1971.
It's an institutional failure that our schools, colleges and universities could not instill patriotism in the minds of students. That's why these youths are showing their favour and support to Pakistan.At the same time Indira Gandhi should have been remembered and a tribute should have been paid to her memory while observing our independence golden jubilee. Indira Gandhi's government extended their full support to Bangladesh while the Liberation War of 1971 was going on.
Indian Prime Minister Narendra Modi attended our independence golden jubilee on 26 March 2021. But it was shocking that Pakistan Prime Minister Imran Khan had his message read out by a lower-level official during the independence golden jubilee whereas global leaders like British Prime Minister Boris Johnson, US President Joe Biden and Russian President Vladimir Putin appeared on the virtual screen and extended their compliments to Bangladesh.
Bangabandhu's sacrifice for the people of Bangladesh recalls in our minds a few words of Rabindranath Tagore "Enechhile sathey kore mrittuheen pran, morone tai tumi kore gele dan" which means "You were endowed with a deathless life which you donated at the time of your demise."The writer is a diplomat, entrepreneur, author, sports organizer and Chairman, Editorial Board of The Asian Age.