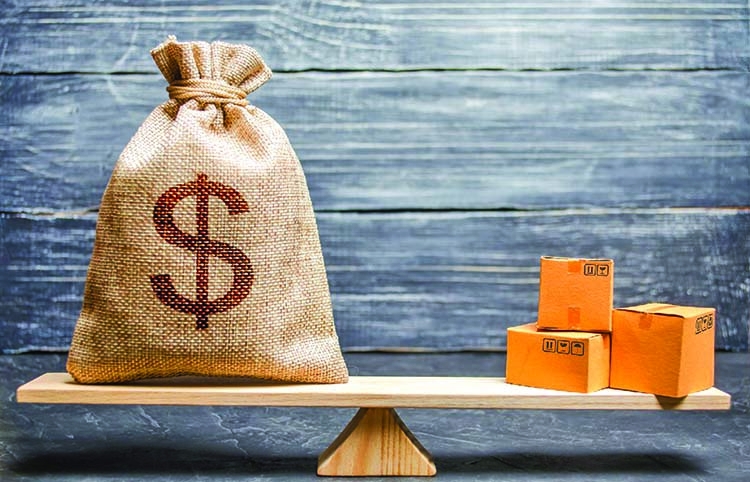 Bangladesh Bank's updated report shows that goods of 2 thousand 390 crore US dollars (13.90 billion USD) were imported to Bangladesh from overseas during the first four months (July to October) of 2021-2022 fiscal year which is higher than the same period of the previous year by 51.42%. In the last fiscal year during the same time span goods of 1 thousand 578 crore 40 lakh dollars were imported.
On the other hand, Bangladesh has exported goods of 1l thousand 480 crore 10 lakh US dollars (14.80 USD) during July to October of 2021-2022 fiscal year. It is higher than last years' same period by 20.45%.
In terms of this calculation, Bangladesh is now facing a trade deficit of 909 crore 90 lakh taka which is equal to 9.09 billion dollars within four months of the current fiscal year. It is approximately three times higher than July to October of the last fiscal year. Last year at this time trade deficit was 349 crore 60 lakh dollars whereas right now it is 78 thousand crore taka.
Capital flight is one of the major reasons behind the burgeoning trade deficit in the country. Financial experts have said that the list of the top money launderers of Bangladesh and the amounts they transferred abroad illegally should be exposed. At the same time required steps should be taken by Bangladesh government without delay to retrieve the laundered funds from overseas, economists have commented.
Bangladesh's banking sector is inflicted with nearly 2 trillion taka defaulted loans including written off debts. Economists have remarked that most of the defaulted loans might have been laundered to overseas locations.
Financial scholars have blamed extreme lack of good governance and accountability in the country's financial and banking sectors for the extensively rising figures of unlawfully transferred money from Bangladesh to foreign countries.
Swiss banks, Global Financial Integrity (GFI), International Consortium of Investigative Journalists (ICIJ), Panama Papers and Pandora Papers have meanwhile unveiled reports about the formidable dimension of money laundering from Bangladesh.
GFI informed that 5270 crore dollars were laundered from Bangladesh during last seven years. On an average each year 64 thousand crore taka was illegally transferred from the country to overseas destinations in light of the figures presented by GFI. Bangladesh is one of the top 30 countries wherefrom most of the money laundering takes place.
Financial experts have referred to political influence and inefficiency of Finance Ministry and Bangladesh Bank as principal causes behind money laundering. In recent times it has been exposed by concerned sources that a powerful group of money launderers are making false shipment papers and fake invoices to facilitate illegal money transfer from Bangladesh to overseas destinations. Under-invoicing and over-invoicing are another two ways utilized by financial culprits for transferring money to foreign countries through unauthorized channels. United Nations Conference on Trade and Development (UNCTAD) published a similar report in 2019.
Reportedly letters of credit (LC) are being opened by some dishonest traders but the goods named on the LCs are not being imported. Economists have marked it as a major way of money laundering.
Prominent citizens have said that a list with names and particulars of several money launderers was unfolded by Panama Papers and Paradise Papers but no remarkable actions have been yet taken by the financial regulators in Bangladesh.
Financial sources have said that Bangladesh became a member of Egmont Group headquartered in Canada in 2013 to exchange information about money laundering and terror finance. Egmont Group has 147 member countries. Bangladesh can seek cooperation from Egmont Group for bringing back laundered money.
Caretaker government's former adviser Dr. Wahid Uddin Mahmud said to The Asian Age, "These money laundering allegations should be investigated immediately. Finance Ministry, National Board of Revenue and Bangladesh Bank can jointly conduct this scrutiny. Illegal money transfer cannot be stopped if stern actions against money launderers are not taken quickly."
Dr. Abul Barakat, President of Bangladesh Economics Association, said to The Asian Age, "Money laundering allegations should be investigated seriously to establish good governance in banking and financial sectors. Bangladesh Bank should clarify what steps have been taken to restrain money laundering."
Dr. Iftekharuzzaman, Executive Director of Transparency International Bangladesh (TIB) said to The Asian Age, "Bangladesh is a member of United Nations. Money launderers from Bangladesh are sending money to some specified countries which are UN members too. So, Bangladesh can identify those money launderers through UN. Moreover, Bangladesh government can resort to international money laundering laws for nabbing financial scammers. Besides, Bangladesh Bank, National Board of Revenue and Anti-Corruption Commission can take strong actions against the perpetrators who are committing such monetary rackets."