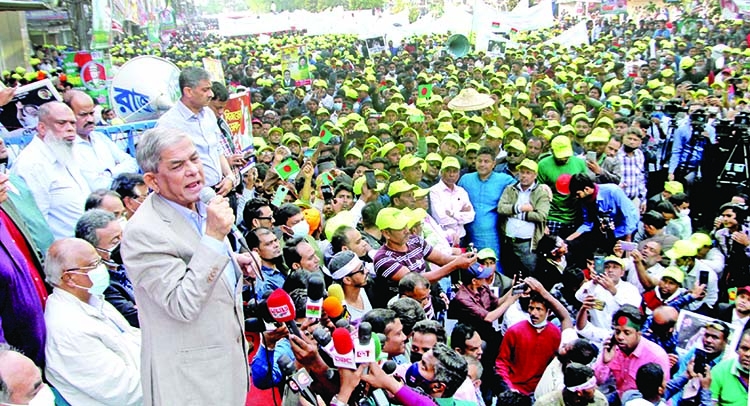 BNP Secretary General Mirza Fakhrul Islam Alamgir addresses a colorful rally his party brings out in the capital on Sunday marking the Victory Day. -Mostafizur Rahman, AA
Vowing afresh to "awaken people for the restoration of democracy", BNP on Sunday took out a colorful rally in Dhaka city, marking the 51st Victory Day. Thousands of leaders and activists of the party and its associate bodies started gathering in front of its Nayapaltan central office and its adjacent areas with small processions since noon, causing traffic congestion and public sufferings, UNB reports.
Led by their central leaders, the party followers joined the rally carrying the national flag, placards, banners and portraits of party top leaders. BNP Secretary General Mirza Fakhrul Islam Alamgir inaugurated the rally around 2:30 in front of the party's central office.
It moved towards Shantinagr from Nayapaltan amid tight security. In the rally, BNP leaders and activists shouted slogans demanding their party chairperson Khaleda's treatment abroad.
In a brief speech before starting the rally, Fakhrul said the current government has shattered all the hopes and aspirations and the spirit of the Liberation War to establish a one-party Baksal rule 'usurping' the state power.
"Today's rally is for awaking people afresh and waging a new struggle for the restoration of democracy," he said. Fakhrul also described the V Day rally as a good start of a movement for the restoration of democracy.
"Let's make a good start of a movement through this rally, to free our leader Begum Khaleda Zia and ensure her proper treatment…through this movement, we'll be able to establish a truly democratic state by restoring democracy in the country and we'll be able to restore our human rights," he said.
The BNP leader said they were taking out the rally with a heavy heart with their party chairperson Khaleda Zia, the "first female freedom fighter" of the 1971 Liberation War, fighting for life at Evercare Hospital in the capital.
Fakhrul renewed their party's demand for allowing their ailing party Chairperson Khaleda Zia to go abroad for advanced treatment.
The BNP leader said it is unfortunate for the nation that a government has been there in power by force using the state machinery even after 50 years of the country's independence. "They (govt) have destroyed everything we achieved-- our sovereignty, our freedom, our right to vote, our right to write, our right to speak."