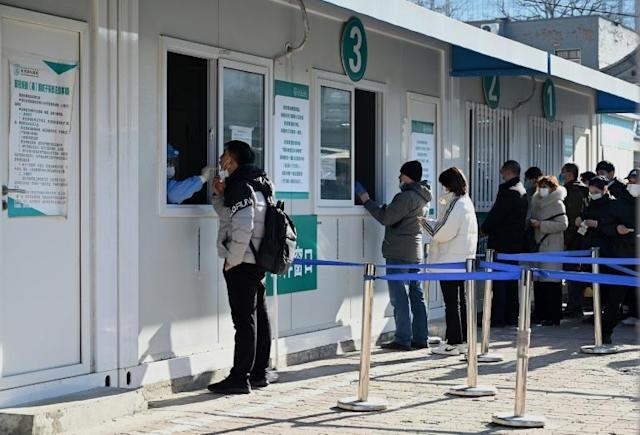 Hundreds of thousands more people were
confined to their homes in northern China Tuesday as the country battled its
worst Covid surge in 21 months and locked-down residents took to social media
to complain about food shortages.
China -- where the virus emerged two years ago -- has followed a "zero-
Covid" strategy of tight border restrictions, lengthy quarantines and
targeted lockdowns as Beijing prepares to welcome thousands of overseas
visitors to February's Winter Olympics.
But authorities have faced a resurgent virus in recent weeks, reporting
209 infections on Tuesday -- the highest single-day tally since March last
year, when the pandemic raged through the central city of Wuhan.
The surge -- while low in comparison to rampant cases in Europe and the
United States -- has prompted authorities to impose what they have called the
"strictest" possible curbs in the northern city of Xi'an, whose 13 million
residents are entering a sixth day of home confinement.
As well as having undergone several rounds of testing, households are
limited to sending out one person every three days to buy groceries.
Nearby cities have also logged cases linked to the flare-up, with Yan'an -
- about 300 kilometres (186 miles) from Xi'an -- Tuesday shuttering
businesses and ordering hundreds of thousands of people in one district to
stay indoors.
The Xi'an lockdown is the most sweeping in China since the similarly-sized
Wuhan was sealed off.
More than 800 coronavirus cases have been recorded in Xi'an since December
9, with the youngest case a 38-day-old infant, the state-run Global Times
newspaper reported Tuesday.