'Don't lecture us about democracy while sheltering murderers'

PM Hasina to US 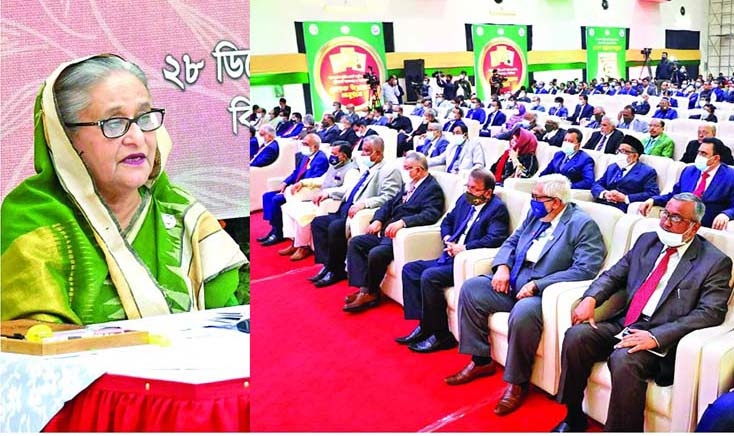 Prime Minister Sheikh Hasina has hit back at the United States for criticizing democracy and human rights in Bangladesh while giving shelter to a killer of Father of Nation Bangabandhu Sheikh Mujibur Rahman. The premier said this while launching a research based Mujib memorial book titled 'Bangabandhu and the Judiciary' and a Mujib Borsho souvenir 'Nyay Kontho' (Voice of Justice) published by the Bangladesh Supreme Court.
She virtually joined the program held on the Bangladesh Supreme Court premises from her official Ganabhaban residence on Tuesday, BSS reports.
Sheikh Hasina said: "The biggest thing is that America always talks about human rights, justice, democracy, voting franchise, but they have given shelter to the convicted killer Rashed who violated our human rights and justice."
She added: "After assuming office, I have repeatedly requested each of the American government to send back the fugitive killer." The Prime Minister questioned how your (American) judiciary gave shelter to a killer, Rashed, who was the commanding officer of carrying out a massacre in number house 32. "How America, despite being the largest democratic country, can give shelter to the killer? What is the reason behind it, I don't know," she continued.
Noting that Canada is giving shelter to the convicted killer Noor, "It is a matter of the biggest surprise that we have to hear about democracy and the rule of law (who are giving shelter to the killers." Sheikh Hasina added: "Now another responsibility has been left (after holding the trial in the Bangabandhu killing case) which is to reveal the conspiracy. There is no doubt that this will come to light."
Highlighting various measures taken for establishing an independent judiciary, she said, "We have ensured an independent judiciary after coming to power as my father (Bangabandhu) envisioned it."
The Prime Minister said that her government did not interfere in any activities of the judiciary likewise other governments referring to use of false certificates and discussion on who would get what verdict by keeping a hand on the shoulder of a Chhatra Dal man.