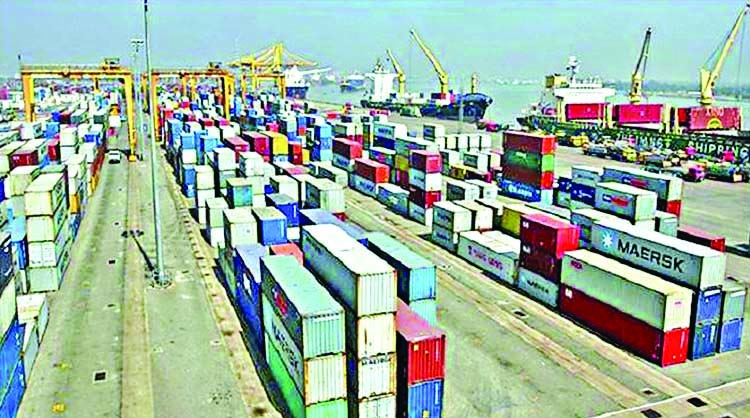 Chattogram Port, the country's main seaport. -AA File Photo
Bangladesh is expected to be the 24 largest economy of the world by 2030 despite the adverse impacts of Covid-19 pandemic that has taken huge toll on life and livelihood globally. Bangladesh has also become a digital economy and the nation envisages that it will be a developed economy by 2041, according to the National Human Development Report (NHDR) prepared by the Economic Relations Division (ERD). The ERD issued a press release on Thursday with the findings of the report which was contributed by leading economists and consultants -- Mustafizur Rahman, distinguished fellow of the Centre for Policy Dialogue (CPD), and Selim Jahan, former director of the human development report office of the UNDP and an adviser to NHDR, BSS reports.
It said Bangladesh has graduated to the middle-income category of nations and its move towards graduation from the Least Developed Countries (LDCs) is on track. It has achieved all the important Millennium Development Goals (MDGs) by 2015, it said.
The country maintained a comparable GDP growth rate for the most recent past 10 years (of FY2010-FY2019) is more than 6.7 per cent as a result, a mere $35 billion economy of the mid-1990s has grown to a sizeable one of almost $330 billion. During the same period, the per capita gross national income has registered a more than seven-fold rise from just $300 to above $2,064.
The headcount poverty fell from 58 per cent in 1990 to about 20.5 per cent in FY2019, it said, adding that average life expectancy at birth registered a rise from 58.2 years in 1990 to 65.4 years in 2000, and then further increased to 72.6 years in 2019. The report said net enrolment in primary education stood at 97 per cent in 2019, up from 75 per cent in 1990, net secondary education enrolment increased to 66 per cent from less than 20 per cent.
The adult literacy rate increased from just 35 per cent in 1990 to 74.7 per cent in 2019, it said, adding that Bangladesh outperformed India and Pakistan in reducing the infant mortality rate, which dropped from as high as 99.6 per 1,000 live births in 1990, to just 21 per 1,000 live births in 2019.
During the same time, it said the maternal mortality rate - measured as the number of women who died from any cause related to pregnancy or childbirth - declined to 165 per 100,000 live births, down from 594 deaths per 100,000 live births.
The report lauded Bangladesh's role and involvement in global peacekeeping, saying so far, 163,887 peacekeepers from Bangladesh have participated in UN missions in over 40 countries.
The country has a total of 6,731 peacekeepers to the UN peacekeeping operations, the report added.
The Covid-19 pandemic situation is causing an unprecedented health and economic crisis for the global economies including Bangladesh with severe consequences for human development prospects.
Development gains over the past decade are being threatened by this crisis as the resultant economic consequences could push global poverty up by as much as half a billion people, or 8 per cent of the total human population.
There is an apprehension that the value of global Human Development Index (HDI) could decline this year for the first time since the concept was introduced in 1990.
So, it is essential to assess its negative economic and non-economic impacts and formulate all possible short and medium-term strategies in order to deal with it effectively.