Be wary of omicron: Hasina 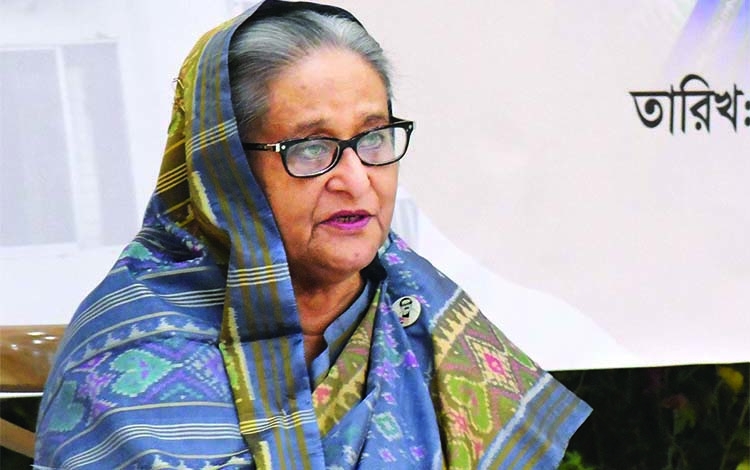 Prime Minister Sheikh Hasina says the omicron variant of Covid-19 is spreading rapidly and that people should be careful and follow health regulations. One thing everyone should keep in mind - there is a new variant," she said at the inaugural event of the National Science and Technology Complex, which she joined via video conference on Thursday, bdnews24 reports.
"This variant is spreading quickly. Entire families are getting infected. So, I urge everyone to follow health precautions and follow the instructions the government has announced." The prime minister also urged everyone to get the vaccine as soon as possible.
"Those who have not got the vaccine should get it quickly. We have started vaccinating school students. The reality is that the vaccine can, at least, save your life."
The emergence of the omicron variant of the coronavirus has led to a spike in cases in Bangladesh and convinced the government to enforce health restrictions after nearly five months. The 11 restrictions imposed by the government will take effect from Thursday.
Bangladesh imposed a lockdown at the end of March 2020 after the first cases of the disease were detected in the country. The lockdown lasted over two months. During the lockdown only emergency service vehicles were allowed to run and people were not allowed outside except in cases of necessity.
Offices, government agencies and factories were all closed.
Once the pandemic situation improved, restrictions were lifted. But the delta variant of the disease caused another wave of cases in 2021, leading to lockdown restrictions from April to August last year. But, in the interests of preserving 'lives and livelihoods', factories were kept open.
The infection rate dropped again around September, leading to schools, colleges and universities reopening for in-person classes after nearly a year-and-a-half. Life largely returned to normal at the time.
However, the omicron variant discovered at the tail end of the year is causing cases to spike once again. Nearly 3,000 new Covid cases were recorded on Wednesday. The daily positivity rate for Covid tests, which was as low as 3 percent 12 days ago, has now risen to nearly 12 percent.