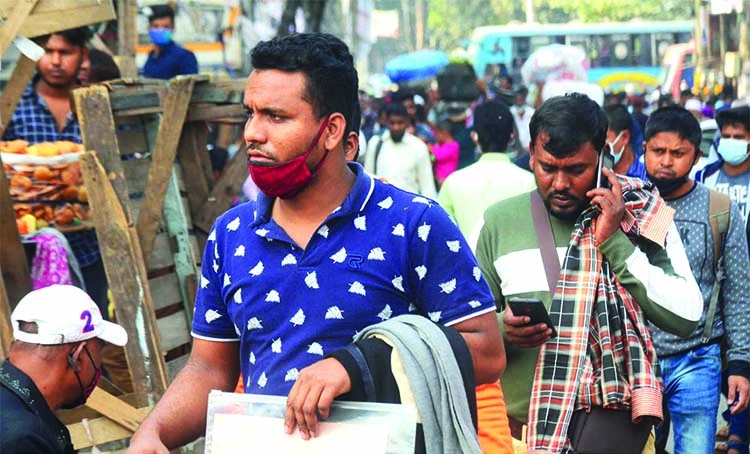 Though Covid-19 cases are on a rapid rise, people show thumb to health rules posing a dangerous situation. The photo was taken from capital’s Gulistan area on Thursday. -Agency
Bangladesh has again fallen in a grave situation as deaths and infections due to the Covid-19 have taken a dangerous jump.
12 new fatalities and 3,359 cases were logged in 24 hours till 8am on Thursday, according to the Directorate General of Health Services (DGHS). Though fresh restrictions imposed by the government in 11 sectors came to effect from Thursday, people are still reluctant to comply with health rules aggravating the situation.
The caseload has now stood at 16,04,664 and death toll has surged to  28,123, according to a regular bulletin issued by the Directorate General of Health Services (DGHS).
As many as 27,920 samples were tested across the country in the last 24 hours, with the positivity rate 12.03 percent. The mortality rate against the total number of cases detected currently stands at 1.75 percent. Among the eight divisions, Dhaka recorded the highest number of cases and deaths with 2,752 infections and eight fatalities.
The recovery count rose to 15,51,955 after another 302 patients were discharged from the hospitals during the past one day. Globally, over 317.18 million people have been infected by the novel coronavirus and 5.51 million have died, according to a tally by Johns Hopkins University.
Bangladesh's total tally of Omicron cases reached 33 with detection of three more cases on Wednesday, according to GISAID, a global initiative on sharing all influenza data. The indomitable Covid-19 has spread to all 64 districts in Bangladesh. The country reported its first case of the virus on March 8, while the first death was recorded on March 18.
The novel coronavirus broke out in China's Wuhan city in late December, 2019 and quickly spread throughout the world, becoming a pandemic in less than three months.