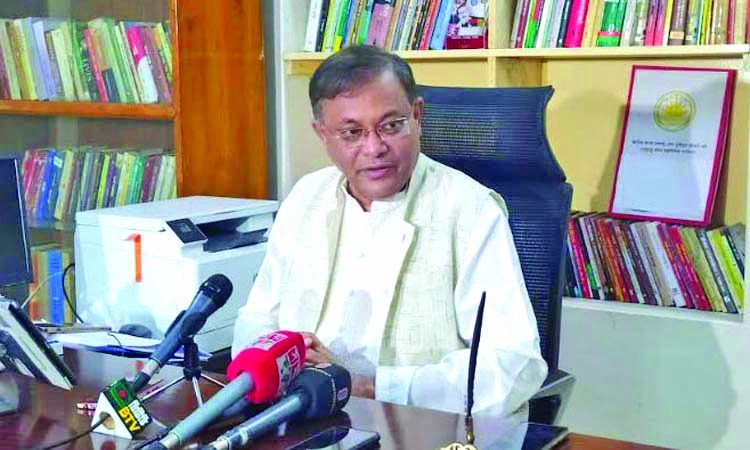 Information and Broadcasting Minister Dr Hasan Mahmud on Friday described the US-based Human Rights Watch (HRW)'s latest statement on Bangladesh as "one-sided, unacceptable and politically motivated". "After reading this, it seems that someone from Bangladesh might have drafted it and they (HRW) only published it after retouching, nothing else," he said.
"The existence of these types of organizations is good. But if the organization uses itself or gives statement for serving the interests of individuals and for political purposes by taking information from individuals of different countries, it makes the organization questionable," he said.
Hasan, also Awami League joint general secretary, said this while replying to questions from journalists at his Minto road residence in the capital. "I saw the statement of Human Rights Watch. It is not realistic by any means, rather it is one-sided and politically-motivated," he said. The minister said it seems that the HRW doesn't know anything more about human rights situation in Bangladesh apart from two or three issues mentioned in the statement.
The statement contained information which is often cited by a writer and some individuals at different meetings and discussions over the Rain Tree Hotel incident, he mentioned. He urged the HRW to pay attention on incidents of extreme-level violation of human rights in the US from where the organization is run. A few days ago, the United Nations (UN) independent human rights experts called the US to close the Guantánamo Bay detention centre, he mentioned. "
Guantánamo is a place of arbitrariness and abuse, a site where torture and ill-treatment were rampant and remain institutionalized, where the rule of law is effectively suspended, and where justice is denied", the experts said on the 19th anniversary of the establishment of Guantánamo Bay on 11 January 2002.
Replying to a question that the government is more active in repressing BNP than curbing the new coronavirus variant - Omicron, Hasan said the government didn't call for keeping stopped only the rallies of BNP to curb Omicron, rather this prohibition is applicable to all political parties, including the ruling Awami League. But now the question is whether BNP wants to prevent Omicron or spread it further, he said.
Earlier, the minister joined the biennial conference of Bangladesh Human Rights Commission's Rangunia Upazila as the chief guest through videoconferencing. He said the assassination of Father of the Nation Bangabandhu Sheikh Mujibur Rahman and most of his family members, stopping the path of bringing the killers to justice and hanging a huge number of military personnel without any trial are the incidents of major violation of human rights in Bangladesh.
Commission's Rangunia unit President Principal KM Musa chaired the conference while Upazila Chairman Swajan Kumar Talukder inaugurated it. Rangunia pourashabha mayor Md Shahjahan Shikder joined it as the special guest.