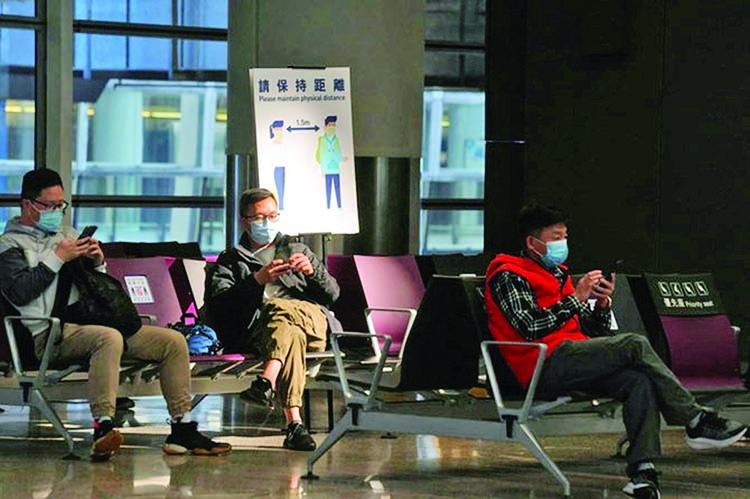 Passengers from more than 150 nations will be banned from transiting through Hong Kong. -Reuters
Hong Kong will suspend for a month transit flights from around 150 countries and territories considered high risk because of the corona virus, deepening the global financial hub's isolation. The move comes as the city has seen around 50 cases of the fast-spreading omicron variant since the end of last year.Prior to the outbreak, which authorities said could be traced back to two aircrew members of Cathay Pacific Airways , the city had had no local transmissions for over three months.
Hong Kong International Airport said in a statement on Friday that any persons who have stayed in places classified as high risk by health authorities in the 21 days before traveling cannot transit through the city from Jan. 16 until Feb. 15. The measure was taken "in order to control the spread of the highly infectious omicron variant," it said.
Hong Kong currently classifies more than 150 countries and territories as high risk. Last week, it banned incoming flights from Australia, Canada, France, India, Pakistan, the Philippines, Britain and the United States, including interchanges. The Chinese-ruled city has followed mainland China's policy in adopting a zero-tolerance toward local COVID-19 cases even as much of the world shifts toward living with the coronavirus.
In recent weeks, authorities have tightened quarantine restrictions on air crew and reintroduced curbs on social life.Fifteen type of venues, including bars and clubs, cinemas, gyms and beauty salons were ordered to close, while dining in restaurants is banned after 6.00 pm. Primary schools and kindergartens have also shuttered.The government is expected to announce later on Friday that the restrictions will be extended through the Lunar New Year holiday at the start of February.
---Reuters, Hong Kong